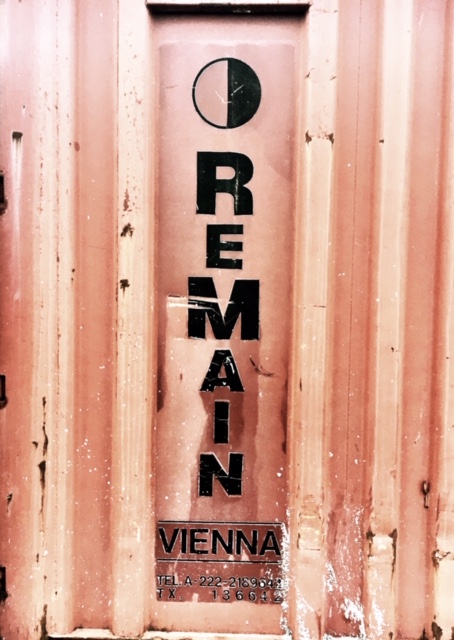 Generally speaking, I don’t frequent big hotels in the number one city. But if I find myself in one, it always surprises me that as long as you are dressed inconspicuously, I find a frock coat, top-hat and silver-topped cane usually does the trick, you can simply push your way through the revolving doors and have a nose around.

In my line of work (roving language jester), this is quite helpful if you need a toilet. I mention this because although Vienna still has some centrally located public conveniences, you are never near one when you need one (and even then you can’t go). More importantly, unless you plan on standing up and relieving yourself in a metal urinal, the admission, and discharge, fee is usually about fifty cents (and fifty cents is fifty cents: half the price of a Cheeseburger, nearly half the price of a lottery ticket, and the equivalent of one single British pound since the 1st February 2020).

In any quest to locate such facilities, it helps, figuratively speaking, to have a helping hand. Although please note that what follows is not an in-depth guide as I usually don’t make a habit of hanging round public toilets for the fun of it (for this you need to download the Grindr App).

Up first we have probably the most famous big one, an Art Nouveau masterpiece situated under the Graben, rumoured to have been designed by the star architect Alfred Loos in 1905 (Lonely Planet says yes, Michaela Lindinger in Secret Vienna says nein). However, if moody lighting, dark wood and decadent tiles prove to much of a distraction as you complete your excretions, then more modern public-relief can be found at the underground stations of Stephansplatz (re-opened in 2019) and Karsplatz (recently returned into public ownership after it was decided that playing an endless loop of the Blue Danube was placing an unnecessary strain on the constipation medicines of the chemist upstairs opposite the Opera House).

Alternatively, there are several in public parks: Stadtpark has one over near the Austrian Mint, or across the other side of the Ring (insert own joke here) there are two in the park in front of the Town Hall (Rathaus). Two, presumably, to handle the thousands of people each year in need of a tinkle during the many events which take place throughout the calendar: the massive ice-skating rink nightmare, the over-crowded, over-hyped open-air music festival in July and August, and of course the world’s most expensive Christmas market with its diuretic devil, Punsch.

But one of life’s little pleasures is indisputably found in the location of a free toilet. You could of course try and nip into one of those famous cafes you hear so much about, but the waiters have been trained in surveillance by Mossad and you will not escape without first ordering a Melange (and then be thrown in prison). Luckily, I have padded the mean and central streets of the number one city for many years, and in this time have developed a network of feely available WCs (pronounced “vey-say”) with no need for a fifty cent coin or that awkward moment as you emerge, passing the attendant with a small bowl and an expectant face.

And so you have all the big hotels, any of the main university buildings (my favourite is the law faculty not far from Schottentor), the old stock exchange (yes, you can just walk in and wander about) and even the odd Otto Wagner inspired “Pissoir” (there is one at Stubendor on the south-west corner of Stadtpark). Shopping centres are also an option – Wien Mitte, the Ringstrassen Gallery and Steffl – but then you will have to mix with people who deem the true path through life is to spend time indoors accumulating shopping bags full of crap they don’t need.

Anyway, we are getting off-topic. The reason I mention hotels is that not long after the start of the year, I had visitors from Britain. Our rendezvous was one of those grand, five-star palaces on the Ringstrasse, a place so posh it looks like the interior of the Titanic.

As we sat down at that bar, one of my friends asked if Austria had the same post-Christmas/New Year’s slump they felt in Britain. Moments like these are a reminder of how long it has been since I have existed in the rhythms and mindset of British life because for a few seconds I was slightly puzzled. Admittedly it was the end of the school holidays and work would resume the next day (not for me), and it was a public holiday rendering the mood more like a childhood Sunday. Yet equally, I didn’t know anybody who had quit alcohol for January, become a vegan or taken a vow to give up social media until after Brexit (all worthy pursuits, especially the relinquishment of social media). But post-Christmas slump?

Actually the party season was about to hit another stride gathering pace till Lent, I told them, referring, of course, to balls (examples include the Bakers’ Ball, the Hunters’ Ball and of course the society lowlight, the famed Opera Ball).

So, when does it calm down then, I was probed? All I could say was that apart from the forty days before Easter, there wasn’t really any defining moment in the cultural calendar when Vienna seemingly pulled up the duvet. In any case, by then there is every chance the warmer weather is on the march, the pub and cafe gardens are emerging from their hibernation and before you know it summer descends and the demand for Spritzer spikes. Then comes Autumn, with the wine harvest and the many “wine wandering” days in the vineyards, followed more recently by the cultural charlatan of the Oktoberfest, and even the two week long celebration of goose eating (Martinigansl). And, just when you thought it was safe to lock the front door and hide, you are back to that juncture in the year when it has been long enough for people to have forgotten what too much hot wine can do to one’s sense of reality and self-worth.

This is an important facet of Vienna; an unfettered commitment to making the most of the vicissitudes of every season. The city resolutely refuses to let the downdraught of January and February get the in the way of tradition, having a few snifters and putting on some traditional garb for a spin around the parquet. Yes, Vienna has a reputation as an introspective place full of melancholic rumination and a sense of fatalistic angst. But even if this were true (it’s true in my house) I doubt very much it has anything to do with those dark winter mornings and the shackles of deep history where the Viennese are taunted by their past. Indeed, as the great Stefan Zweig observed:

“We Viennese loved to chat at our ease; we liked pleasant social gatherings, and in a kindly and perhaps lax spirit of concord we let all have their share without grudging it.”

Such an attitude to life is more pertinent than ever in 2020, especially if you are one of the eleven thousand Brits in Austria wondering what the future will bring once they embrace their new status as foreigner class three with Britain’s exit from the EU. Intermittent emails from the embassy concerning the rights of the alpine Windrush have not improved my usual sunny disposition in spite of the repeated promises that rights will be protected now the withdrawal process is a reality. Yet I have lost my eligibility to vote – everywhere – although it appears I still have a voice in my home, and from 2022 if I choose to return to the UK permanently then Mrs Barratt will need a visa (the children will escape this ignominy through their right to UK citizenship).

And yet although the rights to remain in Austria are “broadly” the same after the 1st February, it will require a return to the immigration office to exchange the current paperwork for something new. And with it (although I can’t get a straight answer out of anyone) possible security checks, proof of income and documentation that I have a permanent place to live. And no amount of videos from the ambassador (proving once again that some people should not commit to digital celluloid) is going to assuage my angst and continual sense of profound vexation.

Brexit is done, or so the deluded mistakenly assume. But it’s like saying that just because you have removed your coat and sat in the dentist’s chair ready for a deep scrape, you can relax and declare that your trip to the dental hygienist has been an unparalleled triumph. Remember, you still have to endure that pointy, claw-shaped utensil finding places under your gums which you never thought was possible without some form of sedative. And so the Withdrawal Agreement might be political equivalent of a smug sense of finality and security, but then they also felt the same after the Munich in 1938. Indeed, as Nick Cohen recently argued in The Observer, “The Munich agreement did not avoid war, it merely postponed it for a year. Likewise, the millions who think they can now avoid the bitterness of 2016-19 will find that it, too, has just been postponed.”

Mensch tracht, un Gott lacht (Men plan and God laughs) goes the old Yiddish saying. And just for once, I am again a believer.