Skip to content
From the outside the building seems inspired by some modernist Orwellian nightmare, like the headquarters of some future secret police where the lights never go out and people never leave or arrive. It is a huge concrete hulk standing amidst the surrounding pigeon-festooned Reumnanplatz, with its striking, moody and austere exterior, much like my face after a morning commute on the 66A bus which terminates close by.

Climbing the steps to the entrance you will notice the graffiti on the front of the building, a sad yet frequent trespasser to the grey façade of this gentle, enduring giant. Amalienbad is no elitist project constructed as it was by a progressive socialist government, in the aftermath of the First World War, to provide a shared space devoted to health and vitality for the oppressed classes (and much later, me). So to see this weekly defacement is a bleak reminder that whatever the mechanisms some people seek to express themselves against the prevailing sociopolitical injustice – a result of disaffection, boredom or too much sugary, taurine based refreshment – there will always be a minority of dysfunctional and unimaginative twits who see the cynical destruction of culturally owned property as their path to enlightenment.

But once you step through the swing doors you begin to understand its transformative power and without realising it, slowly acquire an appreciation of what those pesky social democrats all those years ago had in mind. To your left is the ticket window and just beyond a vibrating machine that will massage your feet and give you an orgasm for 50 cents. You then pass into the entrance hall where you are submersed in an orgy of art-deco exuberance. Now I am no expert, but I have never seen such interior decorating bling on offer in the IKEA catalogue. It is the kind of thing you could imagine in the bathroom of Donald Trump or the palace of a middle-eastern dictator with a mosaic fetish and too much oil money.

At the end, silently efficient, stony-faced but with a system honed over decades of Viennese efficiency, sits the “key-master” (the inspiration for the namesake in The Matrix) whose job is to allocate lockers or one of the individual changing cubicles if you have paid the extra two Euro. The keys are arranged in perfect rows, colour-coded and I am sure they are original. This is understandable as losing your locker key in Vienna, as we know, results in penal servitude or banishment to the deepest recesses of Simmering (the 11th district). Over the right shoulder is news of the water temperature scribbled on a Tafel (board) a rather optimistic 28 degrees on our last visit.

Once your ticket has been checked and processed, with a scrutiny which is quite charming in its own way, you are allowed to proceed to the pool itself and ascend to the next floor via twin staircases either side. Depending on your budget you either traipse off to the normal changing facilities or, if you like removing your clothes in a room not much bigger than a phonebox, you locate your individually assigned Kabine.

These small rooms are spread over two levels and there are 165 in total. You enter through the rear – a phrase usually reserved for the men’s sauna – close the door and then let down a hinged wooden bench (trapping your fingers is optional). Even if cats liked water, these confined spaces offer little room to swing one, but this undervalues their reason for existence. You can take your time, undress at your leisure and, most importantly, avoid preening cocks in the communal changing space who labour under the belief that staring back from the mirror is Brad Pitt.

You emerge the other side (it’s like stepping through the cupboard into Narnia) onto a railed landing which runs around three sides of the pool. This leads to two sets of concrete stairs at either end which bring you back down to the pool itself. It is at this point, for the first time in your life, at least since the 1970s, you might start to appreciate the design potential of the colour brown. And beige. And derivations of brown. It is a reminder that design, or fashion, or what is “in taste”, is simply a result of cultural myth making which, if repeated enough, will convince enough people to accept, adopt and imitate until something more alluring or plausible comes along. (For more of this and other stories about how humans (us) are complete bastards that will be destroyed by Mother Earth, or bio-engineered cyborgs, read Sapiens by Yuval Harari.)

In any case, Amalienbad is proof that brown (or any other colour) is never “in” or “out”, it only exists in the heads of people who seek to sow mythical mischief because they can, think people will listen or are insufferably self-important. Colour is simply a matter of context and contextually speaking Amalienabd would not be the urban palace that it is, without the juxtaposition of its design, concrete, wood, tiles and, yes, its affirmation of brown (years before it became fashionable again in 2016, if I believe the myth). 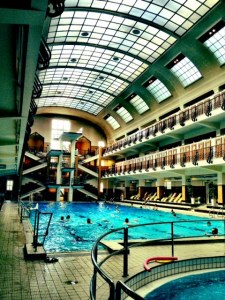 Back to the pool we find above us a fabulous ceiling consisting of several hundred opaque window panels. Flanking it below, on a curved roof reminiscent of the inside of an aircraft hanger, are eight sets of similar but smaller windows grouped in squares of twenty individual panels. It is a masterwork of design and engineering, but I bet a bugger to clean. At one end stands the ten metre diving tower – erect, imposing and terrifying. And at the other, a huge clock standing guard over the children’s pool below, a place equal in terror when crowded. It is no exaggeration to say that what you are seeing is entrancing.

Staring at the wondrous architecture, you would be forgiven for ignoring the pool itself, however. But as you look down, there it is, the main attraction. All 33 metres of it (over 4 metres deep below the diving board) dominating the space with mostly silent, disciplined patrons engaging in the serious business of swimming. Men, women, old, young, some exceptional swimmers, some less so, some metronomically efficient, some unorthodox, some with the grace of dolphins, others (like me) with a style which evolution has yet to explain. And only swimming lengthways, never across.

Reassuringly, although nothing is discernible about their relative wealth (relative weights are easy) it is a real mix of people their body shapes and their ethnicities (although few Turkish women accompanying their menfolk). In this sense, the socialist vision could indeed be accomplished. It is a place where once you enter the water, class is superseded by the twin ideals of body and health. Your common aim is to swim and then take a shower and then stand under the best hair-drying system ever invented. 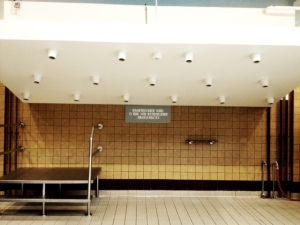 It is then time to leave. Back out into the hell of Favoriten. But before you do so, here are three reasons why Amalienbad restores my faith in humanity and just might be the perfect urban antidote to a restive soul.