My choice is Frauenkirchen and St. Martin’s Lodge and Therme in the middle of the nature reserve of Seewinkel (you can get there in about an hour or so from Vienna if you drive like a Slovak). St. Martin’s is a perfect example of the futility of Trip Advisor. I never read Trip Advisor except after I have been somewhere and the reviews never tally with my experiences (some people really are anal when it comes to travelling and really need to focus on the bigger issues of life like political freedom, religious freedom, perhaps just freedom). In any case, St. Martin’s ambitiously positions itself as a safari destination (hence the lodge) which may raise the hackles of the veteran traveller. But note: Africa doesn’t have a monopoly on Land Rovers, kharki and wild animals and it’s only a word you insufferable, dysfunctional bores. So chill out on the wonderful lakeside terrace, enjoy a dip in the crystal clear waters and convince yourself that interior brown and beige was probably once a good colour for a hotel (see Trip Advisor). 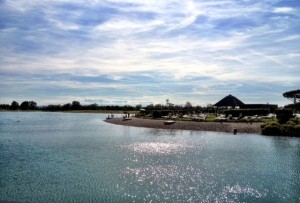 I haven’t been to every pub in Vienna, but I have tried my best. They are many and varied although it is rare to find one outside the numerous “Irish” pubs which has the feel and vibe of what might be classed as a typically British one. One I do know is Fischerbräu in the 19th. The reason for this is that when you enter there is a room where you stand. This changes completely the dynamic of conversation and creates a totally different buzz to the more traditional sit down Beisln. But my choice goes to O’Connors in the 3rd district at the less salubrious end of Rennweg. It has the aura of a great boozer, you can sense the genuine warmth (a open fire helps) as you walk in and the service is understated but excellent. Importantly, it is changing perceptions about British / Irish eating in Vienna (not a plum pudding in sight) and the food is generally exceptional (although it needs to raise its game when head chef Gareth Smith is not cooking). But one bitte: get rid of the television in the bar. Each time I have been there it is turned on but with the sound down (I hate this) Sky news rolling along the bottom of the screen distracting me from the business of drinking a pint or two. I want respite from the world. That is the function of the pub. 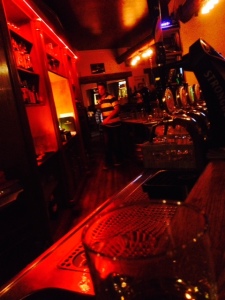 Stadtkind, on Universitätsstraße 11, is your neo-Viennese-café. All light wood, minimalistic, funky coloured chairs and decent music. Plus point is the location (slightly off the beaten track but still the first district) but the smoking section is downstairs (the smoking sections are always in the best bits) and the upstairs smoke-free part feels a little bit like a converted loft where the incessant smoking staff never seem to venture. Once you have had your coffee, emerge smelling of tobacco like the good old days, pop across the busy intersection to the Otto-Wagner Platz and gaze at the majestic beauty of the building of the Austrian National Bank designed by Leopold Bauer pupil of Vienna’s most famous builder, Otto Wagner.

The Vienna Review. Feels like a newspaper, looks like a newspaper and brought to you from the people of Falter (the Vienna version of London’s Time Out).  Bit short on domestic news and mostly features led (it’s a monthly) but the best English language media source in Austria for culture and comment (apart from this blog that is) all for 20 Euro (10 issues) per year.

With the extension of the U-Bahn south beyond Reumanplatz (scheduled to open in 2017 to Oberlaa) the 10th district – or Favoriten – is the place to be. It has “cheap” property, crappy shops ripe for rejuvenation, a great market (Viktor Adler), the biggest melting pot of nationalities anywhere in Vienna, world class ice-cream, the most beautiful indoor public swimming pool in the capital and one great Beisl (when it wants to be – Meixner). A sister to Umar’s fish restaurant from ultimate hangout Naschmarkt has already moved in. It is only a matter of time before the hipsters arrive, whatever they are.