1.a local white wine made in the Vienna region of Austria and drunk when it is very young.

2.a Viennese inn or tavern where such wine is served and often made.

The Heurige, or Buschenschank, is the liquid version of the slow-food movement. It is traditional, sedate and mostly effortless. It as much a part of the cultural fabric of Viennaville (if you are white) as coffee houses, a boy choir and supermarkets with one checkout open. It is a place that encapsulates the Viennese art of good-living, taking it easy, self-satisfied (but not smug), guilt-free indulgence. And it might be unique, although Trieste in north-east Italy has something very similar.

Heurige is translated as wine tavern. It is where the Viennese traditionally go to drink wine (or the dangerously deceptive G’spritzter), converse, nibble from the “buffet”, drink more wine, and then drive home in a state that would get you a life sentence in the USA if stopped by the police.

It is possible in the more modern versions to get a beer or a coffee (heresy I know) but if you ask for a coke or some other fizzy concoction that isn’t Kracherl (reminds me of Panda Pop from the UK) then you will be pelted with rotten grapes and sardonically jeered by the cherry-cheeked locals. 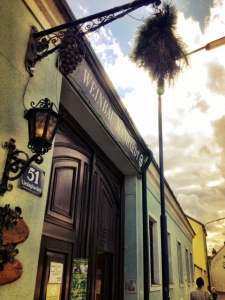 The concept is quite simple really: traditionally, a wine producer would have special permission to sell their own wine and simple, homemade produce from their Heurige. The really traditional ones let you bring your own food although these have largely disappeared and I have never seen one in Vienna, at least not sober. Some of the more commercial Heurige are open year round, but the authentic ones only open for a few weeks at a time (then close and then re-open throughout the year) and rotate their opening hours with other wine producers to give everyone a fair crack at customer wallets. 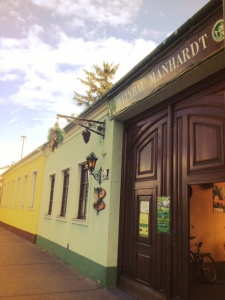 All you have to do is roll up (and roll home) and bag a seat – often wooden benches in the inner courtyard or garden if the weather is clement – order your drinks from the waitress / waiter and then toddle off and see what there is to eat from the food counter. And then order more drinks. And enjoy the company. And have a chinwag. And enjoy the weather – which is impossible at the moment because it feels like we have been transported to Scotland for the summer.

I hadn’t been to the Heurige in years. In our last flat the trip by public transport would have been just too far. So this would have meant a drive by car which doesn’t sit easily with the civilised boozing that the Heurige entails, at least not since that unfortunate incident with a dry-stone wall somewhere in the middle of Britain all those years ago. Also, like many things – museums, parks, my family – there has to a powerful enough incentive to actually bother. For me, the overriding concern is proximity and how quickly I can escape by public transport or taxi once I get bored, restless or too lairy. People have invited me to the inaccessible (the countryside) on occasions and my first thought is, but how would I get home? You can drive, they say. Yes, I reply, but what makes you think I can spend any time in the company of you people without having a drink to take the edge off the conversation?

This means I am not much of a day-tripper in any sense (I make an exception for luxury train travel and the lure of lager) and prefer to keep it local where possible. Which brings me to Oberlaa.

Oberlaa is in Vienna’s 10th district. In a few years it will be the end-station for the underground line 1 which is currently being extended from Reumanplatz (see Route 66 in the blog). Crucially, this will make Oberlaa the only wine region of Vienna directly accessible by underground train. All the others (Mauer, Bisamberg, Sievering, Heiligenstadt, Nussdorf, the tourist bus hell that is Grinzing) are only reachable by tram or bus. It is too early to say whether this will have an immediate impact but I have speculatively shifted all my spare cash into some dilapidated yet charming buildings nearby, sold to me by a very honest gent from Bratislava who, come to think of it, didn’t leave a forwarding number.

Anyhow, Oberlaa is mostly renowned for its beautiful park, some fancy-pants chocolates, thermal waters and huge spa complex which I may write about once I have recovered from the incessant shouting of small children and hurtling down backwards on the rubber-tyre water-slide. But tucked away in this largely non-descript, somehow melancholic sleepy suburb, hidden even from career Wieners, there is something special: wine.

It is claimed that Vienna is the only capital city to have an active wine industry within its city limits with approximately 180 licensed Heurige and nearly 500 wine-makers working nearly 700 hectares of vineyards. According to my Austrian Wine Guide, by Peter Moser, vineyards weren’t documented before 1132 (although common wisdom contends they were almost certainly here during Roman times – wonder how they know?) but since then they have thrived throughout the city (there is even a surviving one in the first district at Schwarzenburgplatz). 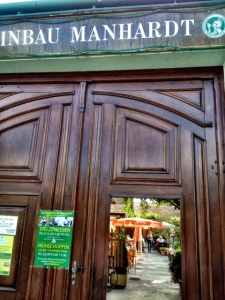 The Liesingbach is the place to hang out in Oberlaa if Heurige are your thang. The most famous is Windisch http://www.heuriger-windisch.at/ which has been in the same family since 1882. But we are being adventurous and have settled on Weinbau Manhardt for a couple of parent pace spritzers, some Soletti, Liptauer and a Fleischlaberl (an Austrian burger). The kids get grape juice but are warned if they run around like demented cats they will be banished to the car and the disapproving glare of the fat man on the next table.

We stay for an hour enjoying the break in the weather, wondering whether the potency of this unadulterated of authentic G’spritzters would make me think I could speak German. But alas I am driving, so we pay up (I still shed a tear of happiness at the price) and shake hands and back slap our fellow guests as we leave, vowing to return once the monsoons have passed and the threat of flooding has moved to Slovakia. And of course to find out the true provenance of a “Rote Casonova” (see below).