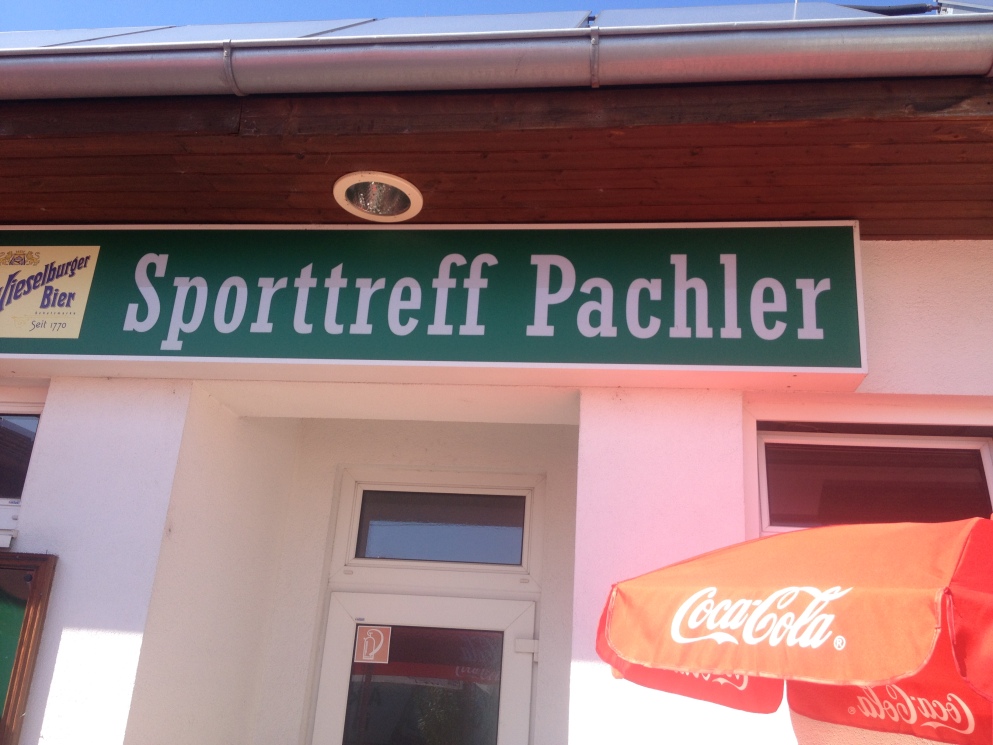 Sporttreff Pachler is located on the southern rim of the number two city (ranking provided by those traitors at The Economist). Although it is essentially part of the urban sprawl of Vienna’s 23rd district – it is a very close to the light industrial park of Inzersdorf – it survives amongst farmland, wooded paths and some open spaces perfect for dogs to ambush joggers.

Running parallel to the east is the continuation of cycle path Euro Velo 9 which takes you to Laxenburg (or, if your legs are up for it, Pula in Croatia). Directly to the south is the Vorarlberger Allee. As you cross it, you are about to leave Vienna although it would take an imaginative leap of faith to assume that this street would take you anywhere near Vorarlberg, Austria’s most westerly province. In any case, after a short distance uphill through some hedges, you emerge atop what looks like a motorway. In the distance you can see the Wienerberg complex, the glistening dome of Otto Wagner’s Steinhof to the west, the massive hulk of Alt Erlaa and just south of that, the hills and forests hugging the posh enclaves of Brünn, Perchtoldsdorf and Mödling. It is an intriguing sight as I suspect it is a perspective of Vienna few people ever slowdown to appreciate (it’s a view most people will take in from speeding roads). Then again, interesting vista notwithstanding, one cannot escape the fact that you standing above a thunderous piece of tarmac spoiling the mood. So let’s talk roads!

The Schnellstrasse 1 (S1) below you is essentially a watered down version of the Austrian Autobahn, a stretch of quasi motorway joining other stretches of pseudo motorway in a half-arsed attempt at a Viennese orbital. In one direction it links to the Südautobahn (A2), taking you to either Italy or the Balkans, and in the other, to the notoriously crap A4, the main road to the airport and gateway to those terrific chaps in Hungary. But you still need an Austrian toll sticker to use it. Failure to do so, in fact anywhere on the Austrian system and you are caught in one of the random checks, then the penalties are stringent.  But the main difference is that on the Schnellstrasse speed limits are usually capped at 100 km/h. In other words the “quick-street” is not as quick as the motorway. Which seems perfectly rational. I think.

A brief interlude into the classification of the motorway system in Austria has, of course, nothing to do with Sporttreff Pachler unless you want to reach it quickly (or more likely, leave quickly). So what makes Pachler special? I am tempted to say nothing really, although this might be the point. In that one is able to find such perfectly adequate facilities everywhere in Vienna without the need for the petty machinations of being part of a “club”. By everywhere I also mean every small town or collections of villages dotted around Austria (it is also my contention that this is  much the same with open air pools where you will always find a decent one in spite of the unpredictable weather). This means tennis in Vienna and beyond is about ubiquity and accessibility and the facilities rarely disappoint. Surfaces are top notch, the nets are never broken and there is often a tennis umpire chair to have three seconds of entertainment as you sit there and say: “New balls, please!”

And so to specifics: Pachler, as part of Sportzentrum Süd, consists of an artificial football pitch which is home to FC Inzsersdorf who play in the 5th tier of the Wiener Stadtliga, which in turn is in the 4th tier of Austrian football (I sense your comfort in receiving this information). On the other side of the clubhouse there are six clay tennis courts. Two of these are reserved for non-club members and assuming a court is free, you can just turn up and play (it costs between 10 – 14 Euro per hour depending on the time and day). There is a decent enough non-smoking bar and restaurant and a spacious terrace outside for your children to annoy other guests once they have finished their post-match ice-cream. And that is it. Book your court, hit a ball for an hour or two, sweep the court ready for the next players and then settle down and drink a Wieselberger. It might be bit rough around the edges but it promises no pretentions. It is a place to play tennis free from the constraints of ego and exclusivity. 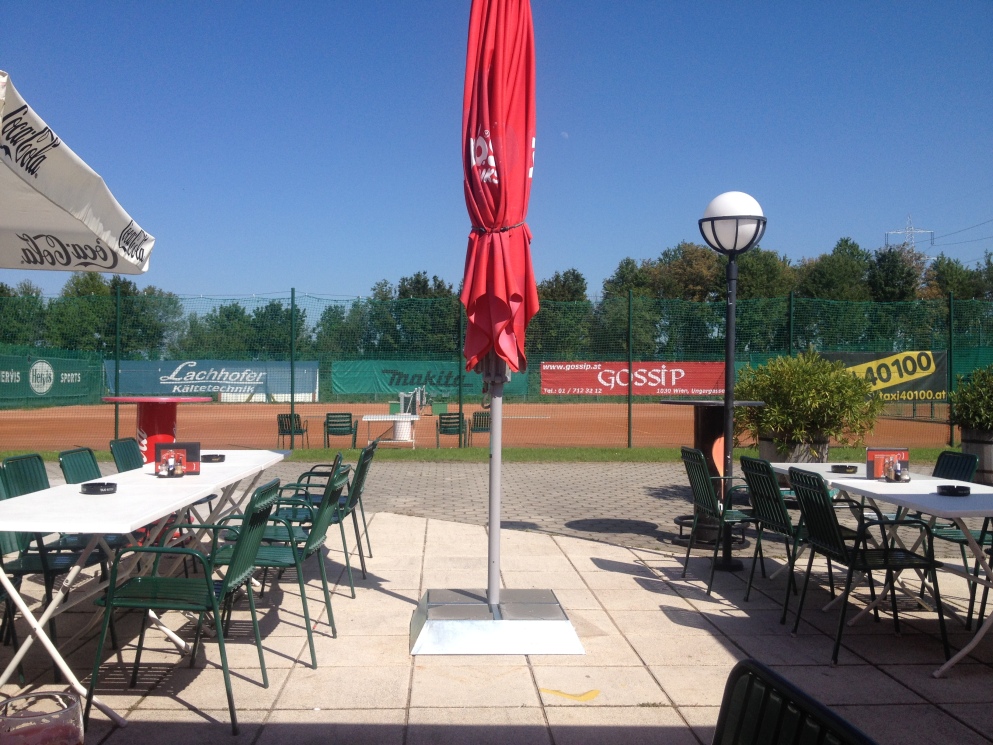 Of course, if anyone did get a bit precious, I suspect the owner, Ferdinand Pachler, would be happy to remind them of the need for tolerance, respect and modesty. For Ferdinand is an ex boxer. Even if you don’t believe him, the size of his shoulders and hands should deter the most self-aggrandising braggart. In other words, he is the size of a bear and will pick you up with one hand. (If you ever get a chance to visit, pop inside and take a look at the small cabinet just to the right as you enter the bar. Inside you will see a modest shrine dedicated to Pachler’s career.)

I had never played tennis indoors until I moved to Austria and even then it took more than a decade. Back home in the UK, an indoor court was usually synonymous with an elite training facility and therefore inaccessible. Moreover, tennis was associated with summer so the need for indoor facilities was never really an issue. With the arrival of October and November sporting endeavors had transmuted to rugby, football and punishing cross-country runs in feeble athletic gear not designed for the British winter. In fact the only time I ever saw anyone playing indoors was in my university sport’s hall, but this was rarer than my attendance at lectures. But within a ten minute drive from my current home, there are two indoor tennis centres where I can go and play. Yes they are also part of the fabric of elite tennis in Vienna but there are essentially open to everyone with a racquet.

One of these is Tennisclub La Ville, hidden off a small side street of the Altmansdorferstrasse in Vienna’s 23rd district (you can also see it as you travel on the U6 between Alt Erlaa and Am Schopfwerk). Playing there, I sense, is part of my destiny in that the name is spookily reminiscent of a certain pub in the town I went to school (the boozer was called “De Ville”) mostly because it was a haunt of my mother at a time when all-day drinking was part of a balanced diet and modern parenting.

In any case, La Ville is home to ten clay courts, nine indoor “carpet” courts and one “opti” court, identical to the one used in the ATP 500 Erste Bank Open in Vienna and indeed used as a practice court by some of the pros in the week before and during the tournament in October (yes, I have gazed in wonder at the poorly exposed photographs on the walls). Costs and subscriptions vary which I can’t be bothered to explain here, but an hour in the off-peak time (includes weekends) during summer is 13 Euro. Let’s face it, whatever your exchange rate, 13 Euro (currently about 13 Brexit British pounds) for an hour of tennis, inside or out, on a court graced by some of the “greats”, with a picture of Thomas Muster inspiring you towards imagined glory in suburban Vienna, is a bloody Schnäppchen (a bargain).

But that is not all. There is also a gymnastics centre, a tennis shop, restaurant and a small swimming pool. The bar is a tad jaded but efforts to spruce it up with some painfully talentless canvas artwork and a flatscreen Samsung should not put you off. But awaiting you is a terrace overlooking the courts, a decent pint of Zipfer and again ice-creams or cakes for the zee Kinder.

Some of the outdoor courts in winter also convert to something called heated “Lufthalle” (it’s like a huge inverted bouncy castle) meaning one can play on clay all through the colder months. It seems like a lot of effort but it tells you one important thing: tennis in Austria, as I am now beginning to believe, is a predominately winter sport. The reason I say this is that in winter it is often necessary to book at La Ville, but if you turn up in summer, outside the times when it hosts various, national, regional or feeder tournaments, this wonderful facility can be strangely empty. Once on a warm and sunny weekend afternoon in August this year, of the twenty courts, we were the only ones playing. This intrigued me so I asked the chap ferrying the lagers why it was so quiet? His answer was sad yet simple: “People just don’t come any more.” Suits me, I thought, I never liked crowds anyway. But when I think back to that time as a child and teenager, a time when I would have sold my brother to the Stasi if I could just hit a ball, seeing such facilities rendered idle thirty years later is rather dispiriting.

With this in mind it is now time to call a close on play because our attentions must inevitably turn elsewhere. A move you might say from top-spin and backhanders, to political spin and back-slapping. Yep, in just over a month we have another general election in Austria. And to get a broad understanding of the impending narrative we need to decode some political messages and the stories they tell. Well, I am going to try.