9 reasons that tell you it is December in the number one city:

1. Scrape – The first sound you hear in the dark mornings (apart from the ceaseless whinging that Christmas is coming) is the soft, rhythmic scraping sound as ice is removed from car windows.

2. Insolence – The second sound is the slap, slap of my gloves across the face of my neighbours as I greet them in the morning with a “Morgen, frisch oder?” only to be answered in the sarcastic tones with a “Na ja, es ist Winter!” (To appreciate fully the effect one must say the “Na ja” as if speaking to an socially inept, incompetent teenager.)

3. Autumn – In relation to point 3: it is not winter until the 21st of December. We are still in Autumn. Don’t forget it. But don’t worry, if you do forget, someone will remind you in a singy-singy voice. 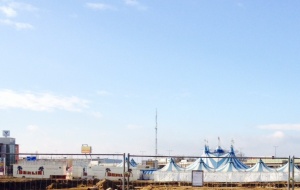 5. Stalemate – If there was a general election in September, then there is usually no government. I think the best line I read recently was “Christkindlcoalition” (literally, Christ child coalition) so perhaps there is a ray of political hope. Personally, I would pack them all off to a handy Christmas market (how about the one outside the town hall, only five minutes walk from parliament?) get everybody rosy-cheeked on Aperol or Hugo Punsch, then load them all in one of those crap Christmas trains, wearing Santa hats, ferry them back to the chambers of power and then thrash out a deal.

6. Asphalt – In December, Vienna likes to dig up and repair roads. The reason for this is that the road repair apparatchiks in the city are intent on using up their road repair budget before the close of the year. As students of business economics will testify they do this to protect their designated budget for next year, in the hope it is maintained – because they obviously need it – or better, increased. However, as you know Wien ist Anders (Vienna is different) and my sources deep in the innards or municipal power reassure me that this year there will be no repairs because the entire budget is mooted for the final phase of the ill-fated redevelopment of the Mariahilferstrasse (assuming the people of Vienna give it the green light in a vote next year). In any case, repairing roads in winter (as any Swiss will tell you) is about as useful as a cold Glühwein. And I trust the Swiss although they really think it is funny if you drop your bread in the fondue.

7. Tradition – There are two types of people in Vienna in December. Those that love Christmas markets and those that used to love them but now find it necessary to bemoan the over-commercialization, the prices, the crowds, the crap tat, the mass produced sugary gloop and the lack of tradition. And, as you all know, that is my job. Truthfully, I am indifferent. I am no great fan of Punsch and standing around in the cold (I had enough of that playing sport at school) although will be tempted out for one or two if you promise to take me to a pub afterwards. But I like the intended tradition of a Christmas market or “Punsch Standl” as a place of social continuity and community congregation. That said, I now refuse to attend in the company of people I work with after a four evening marathon back in the noughties.

But what I increasingly despise is the avaricious need for everywhere to have a Christmas market, just for the sake of it. For example, my current bête noir that is Naschmarkt. Naschmarkt used to be a market. A good one. Then it became an “event” destination in itself as hip bars and restaurants moved in. And the fusion worked to some extent. But mass tourism is turning it into a caricature of itself and soon all you will be able to do is eat over-priced Asian food, buy olives and congratulate yourself that you managed to bag a table at Umar’s and therefore you must be special. And so it is no surprise that finally it has its own Christmas market, in the middle of the street between the two Wienzeiles. And logically what’s next? NM goes to the Oktoberfest? NM goes to the races? NM goes to the beach? This refers to the dismal trend in Vienna to recreate the “beach” in the city. As someone who grew up very near the sea you need more than a deckchair and a bit of builder’s sand to capture that special feeling of being by the ocean (you want strong winds, testicle shocking sea temperatures and screaming children). But no, it is another moribund, always disappointing and cynical attempt to extract more money from people in return for an “experience”. Why can’t places just be content to be special at what they do? Why do they persist in trying to replicate or chase every seasonal trend when the results are invariably, as we used to say back in the day, pants?

8. Taking the Piste – Talking of long underwear, you know that it is December because the world is urging you to go skiing. If you tell people in Austria you play golf they give you that look of “Oh yeah, think yer special or something?” given its image of something exclusive. You may think that golf is dysfunctional and that once you start playing you never have sex. And when people chucklingly tell me this I refer them to the Tiger. Anyway, the point: golf is seen as expensive. But such responses typically come forth from the same mouths of people who go skiing. Have you ever been skiing? I have. And so has my credit card. And only one of us came back unscathed.

9. What is the purpose of your visit to Vienna, Mr Barratt? Toursim! – And finally. I have made the argument in the past that as the commercial centre for central and Eastern Europe, a base for the United Nations and the number one conference city in Europe, Vienna does not rely on the traditional interpretation of tourism. And this is partly true. Yet nip into the city in December and you will see bus after bus of visitors from bordering countries and beyond, wrapped and bobble-hatted up for a peripatetic tour of Vienna’s more famous Christmas markets (see above) and its temples of retailing. Some of the buses seemingly push the limits of modernity and environmental friendliness and I can only admire the optimism and bravery of the cooped up passengers within, obscured by misted windows and exuberant in expectation of a hot sausage and some Vienna Christmas magic. But this is why God gave us hot alcoholic drinks. A couple of mugs of Turbo Punsch and you could cart me home on the back of a donkey. Which if you think about it is the true spirit of Christmas.