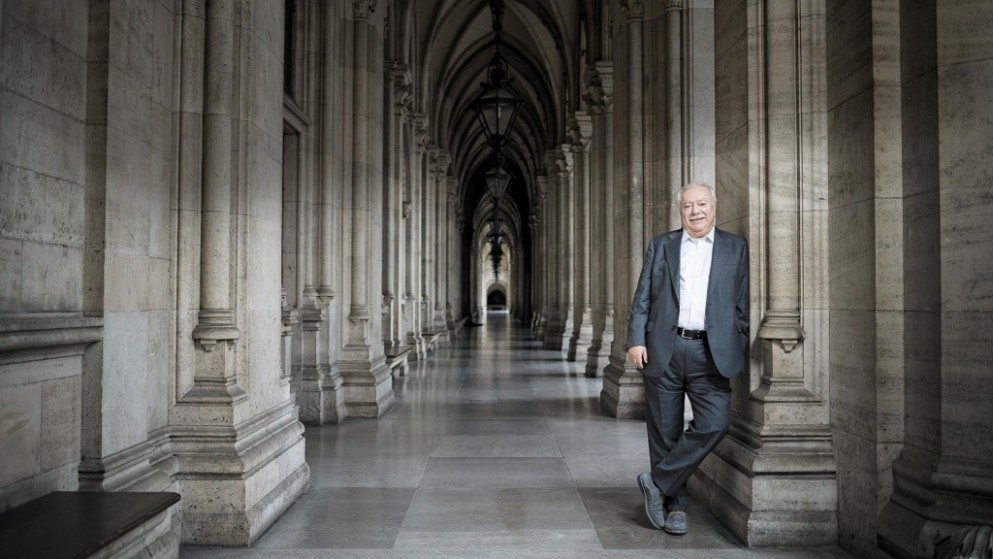 On the 24th May, long-standing city Mayor, Michael Häupl, will handover his keys to the Rathaus and get to know his pension better. In his time in charge, Vienna has been transformed from an often overlooked outpost on the eastern rim of Western Europe, to an international life quality champion and tourist magnet.

On the eve of Häupl’s denouement, I wanted to try and understand how he contributed to this makeover. In other words, given the circumstances, Austria joining the EU in 1995, the opening up of the East, the boom in tourism that followed and economic development, could any politician have more or less achieved the same? Part of this, and arguably more important after my double decade in the number one city, includes the simple question: what has Michael ever done for me?

Looking back I have witnessed the boom in tourism, the expansion of the underground network, the rejuvenation of buildings, the rolling out of numerous projects to build luxury apartments which I will never afford unless I am offered a state utility at a knockdown price where I can cream off the profits, and the increased influx of people on the street selling the fake version of Augustin, Vienna’s official homeless magazine. But probably the single key initiative which had the biggest impact on my life and family – when they came along – was the free kindergartens, introduced ten or more years ago. And not as some of you have suggested, Häupl’s decision to let German people come and live in Vienna.

Anyway, in celebration of this and his twenty-four years at the helm of Wien, here is a round up of some of his more notable achievements. This is not my personal list, because I don’t do lists. No, it is kindly provided by the in-house magazine of my chums down at the SPÖ (Social Democratic party of Austria); my thinking being that if anyone can provide a catalogue of the great and the good from Häupl’s tenure, then surely it must be these guys. So I use it as a guide, but I warn you now, there are comments. Naturally, sneaking in further down the list is reference to Vienna having the highest life quality on the planet. (Not in The Economist ranking, I hear you protest. Melbourne is top, Vienna second. But who reads The Economist, libertarian, Brexit loving rag.) But what we want is something you don’t already know. So here goes …

It begins well. First we get some environmental stuff: separation of waste, climate protection and the safeguarding of green space in the city (this presumably includes the many vines which are Häupl’s favourite plant). All very commendable, especially the free compost, the obsession with trees and commitment to green energy.

Then, some geo-politics: the opening of the “East” (they mean Eastern Europe, not eastern Vienna) bringing about mutual development along with Austria’s neighbours. This includes entry into the EU although I am not quite sure what this really had to do with Häupl other than he probably lobbied for it and voted in the referendum. But it did allow me to come and live and work here without any special permit – for now – although this might be up for review depending on my status as one of the forgotten Brits chalking out a living in the rest of Europe. (Latest news is that I, and the other million souls like me, will be landlocked, although Austria is already landlocked, so this part will not affect me.)

Then we get transport policy with the dazzling news that the underground system in Vienna is now in every district. This sounds encouraging but it takes a bit of imagination. Where I live, for example, I need a 15 minute journey by bus to reach the network, an enviable choice between the U6 (known for its laid back ambience and guarantees of a seat) and the U1 (eponymous for its aromatic vibe and more languages than the bar in the Tower of Babel). Also it is my belief they keep extending it to places where nobody lives. I have been to the 22nd district, on the latest extension of the U2, and I have seen more life on the moon. But this is all set to change because the U5 (someone needs to tell Wiener Linien how to count because there is already a U6) will snake its way through the 9th to the 17th districts (because they really need it).

But at last some good news! Vienna’s public services have been protected from the iniquitous creep of privatisation. Ideologically sound, good for its reputation and high on my shopping list as I make the difficult journey in my third decade in Vienna from English language professional to oligarch.

Next up, education: the best training chances, educational guarantees and, yay, (here it comes, folks) free kindergartens. I have nothing to add except doff my hat and say thank you. But hold your Lippizaners! Vienna is one of the top university and research cities in Europe. Really? A quick check in the Times University Rankings tells us that the highest placed Vienna uni is at number 80 (The University of Vienna), closely, followed by the Technical University (known locally as the “TU”) which sneaks in at 151. So, top, yes.

Never mind, there is hope in start-ups. Under Häupl we are told 160 thousand companies have been founded making Vienna the business capital of Austria. This is hardly surprising when a quarter of the population lives here. But there is scant mention of how many have failed in the same period although remember, failure is not a word used in Vienna, at least not in public (anonymous hotline).

Anyway, back on the Danube plain with have numerous infrastructure projects like the Main Station development, new parts of the Stadt like the Donau City, Seestadt Aspern, Sonnenwendviertel (behind the Main Station) and, I quote, “many, many more”. But what about housing? According to the stats, over 60 percent of Wieners live in social or subsidised homes, which is why many can afford to lease very expensive German motor vehicles whilst I ride around on a twenty year old Vespa. But as anyone will tell you, like Melbourne on the other side of the world, private housing costs in the capital are not what they were (i.e. affordable). Is this a problem for social cohesion and wealth distribution? Well, not yet. Just as long as the sun comes out long enough every year, allowing Schanigartens to operate at full capacity with an unimpeded flow of pacifying Schnapps.

All of this is helped, of course, by Vienna’s wages policy. Apparently, it has the lowest difference between men and women’s salaries in Austria, reminding everyone of Vienna’s progressive and egalitarian credentials. Of course, it might just be the SPÖ’s ways of tying to incite a brain-drain from other federal states and nab the best talent. Then again it might have a lot to do with the social and religious fabric of the regions outside of cosmopolitan Vienna. Let’s just say, whilst Vienna has embraced the modern (ish) and the progressive (ish) there are some places outside the capital – and I choose my words carefully – which might be perceived as (whisper it) a tiny bit more … conservative. And when it comes to tolerance, Vienna does it better than anywhere this side of the Alps; from the internationally known Life Ball, the Rainbow Parade and the discreet hosting of Russian money.

And so there you have it. If I was writing Häupl’s school report it would be something like, “excellent effort all-round, some remarkable results and should do well in the future”. Could any pen-pusher have accomplished the same? Perhaps. All I can say is the evidence is out there, so go and take a look. Just avoid the first district if you value your sanity.

Yet one niggling concern remains: how was all this largesse financed? It is an open secret that Vienna has a rather substantial overdraft (about six billion big ones) and the debt is not showing much signs of dwindling. Yet we have been told again and again by the finance chiefs down at the town hall that the budget and debt is manageable. As head of Vienna for a quarter of a century, Häupl has overseen a transformation, this is evident. But does this mean all of this transpired by having a lenient bank manager and, if so, is this the legacy? It’s like being married to someone who after a 20 or more years of prosperity, growth, wild spending, investment, new cars, expensive holidays, suddenly announces, you know what honey, all that was made possible by a huge bank loan when you thought all along it was a generous salary, hard work and careful use of money.

So in spite of the obvious success, does the debt burden tarnish the Häupl stewardship? To try and answer this we must turn to experts, and I like experts, especially the medical ones who look after my reproductive organs. According to Nobel Laureate and economics kingpin, Joseph Stiglitz, running a deficit in itself should not be a bad thing. The reason for this is that when a government spends more money and invests, this money circulates around the economy creating jobs many times over (leading to more wealth taxes and consumption). Indeed, as he argues:

“High-return public investments that more than pay for themselves can actually improve the well-being of future generations.”

And those future generations are going to need it. But what we can take from this is that debt driven investment to stimulate growth is desirable, so we should not worry too much how free kindergartens are financed and who will ultimately pay for the driverless underground line 5 (your reputation is saved Herr Bürgermeister). Moreover, debt is usually not a problem if you have enough assets to generate money. And no one can accuse Vienna of not having a few assets and ways to boost the coffers (they can always sell a couple of Klimts, lease the Hofburg to a Chinese billionaire or raffle a few tickets for the New Year’s Concert).

But what should a city invest in? Well, according to Stiglitz it is infrastructure, transport, communications, education, families (especially allowing more women to return to work which increases the labour supply which in turn is good for the economy). You may not agree with such an approach and believe watching the pennies is more prudent. Some people even call this austerity. But if anything, the way Stiglitz talks, it sounds a lot like modern Vienna.

So how will the new mayor, Michael Ludwig, continue this vision? In a recent meeting on the Kahlenberg, one of the hills overlooking the city, he, along with his “Zukunftsklausur” of the SPÖ Vienna (translated as “Future Conclave”) apparently came up more than a hundred new ideas. One major brainwave is to improve the life quality in all districts for all residents (except Germans, supporters of the FPÖ and people drinking Red Bull) with the first major project being the redevelopment of my old friend Reumannplatz up in the 10th district. But top of the list is to make Vienna the European capital of digitalisation which includes something called “Smarter Together”. It is a noble mission although I am not sure what it means yet. But rest assured, if he can make Reumannplatz look attractive, then the achievements of the six billion Euro man will pale into insignificance.

Ps – the source of the picture is from the SPÖ website. As a member, I am sure they don’t mind me borrowing it. Smarter together!