Part of the joy of Vienna is the cycling. Or would be if it weren’t for the drivers. I was reminded of this very recently after another near miss on a zebra crossing doubling as a cycle path. They have this bonkers system here where cars can turn left or right at traffic lights at the same time as pedestrians crossing the street. This has the unfortunate consequence of placing a two tonne hunk of metal in about the same location as a people, and that just doesn’t seem prudent.

As I mentioned in my post about driving, locals will argue that if you grow up with the system and learn to drive a car here (yes they learn, and yes there is a system) then such a rule is moot (dangerously speaking). My conciliatory self can graciously accept such crude convictions but this doesn’t change what I see nearly everyday: man and machine – like a couple of randy teenagers at a church hall disco – getting uncomfortably close.

Vienna is covered in cycle paths, some of them even useful. Like most cities I would venture, one can be happily cycling along separated from the twin menaces of driver and pedestrian when suddenly the path will perplexingly disappear. This is bad enough for someone of my constitution but my other pet cycling hate is when the path starts to cruelly lead you away from the direction you want or need. In such cases extracting oneself is almost impossible because by then you have become irreversibly attached to the positioning of the path in spite all the cognitive data telling you that something is not quite right.

My second favourite cycle path is from Auhof in the west, to Hietzing and the Kennedybrücke (named after Jackie) in the 13th district. It runs adjacent to the dribble that is the river Wien, down below the main road in and out of the west of the city. It is purpose-built, express cycle way carrying you along at an incredible speed, shooting past the queues of traffic above. It is also a favourite for dog walkers but they should know better and it is not my fault if their four-legged, piss-poor excuses for pets get caught under my knobbly, merciless tyres.

My darling, of course, is the Ringstrasse downtown, with all the nice buildings, 5 star hotels and weirdos on Segways. The Ring cycle path is brilliant for traversing at high speed and scaring the bajesus out of befuddled tourist groups – I approach with deadly silence only to sound my industrial klaxon at the last moment and then fly through them in a flurry of dust, cackling insanely.

Part of the cycle network outside of Westbanhof was painted green recently (now black due to overuse) as part of policy by the green movement in Vienna to further antagonize the far right and the more moderate conservative political factions. Now it is not for me to say whether a pre-requisite for a bias towards the politics of the centre-right is to hate cycling and cyclists. But I have my suspicions.

In any case, like it not, cycling is front and centre at moment due to the Radwoche (Cycle Week) which will start on Sunday. This is part of the Radjahr 2013 although I am not sure what has happened to Radmonat. Radwoche is a celebration of all things pedal powered and the centrepiece is a four day international conference (Velocity) bringing together 1200 town-planners, architects, environmental experts, bureaucrats and bearded men in special adapted cycling tights. The week will also include a cycle fashion show over the pond outside the Karlskirche, a concert of a thousand bike bells (avoid if you have been drinking), exhibitions, a film night and a spiffingly sounding, retro-inspired “tweed” ride on Sunday the 9th at Vienna’s answer to Ascot, Freudenau.

In truth, Vienna is no Copenhagen or Amsterdam. According to my sources, cycling accounts for 6.3% of the total share of traffic journeys in the city which is mid-table compared to our European cousins oop north. But since the arrival of the red-green coalition, cycling is being pushed in a big way and it has become a key part of Vienna’s commitment to integrated public transport and the movement of people around the city. The point is Vienna should be perfect for cycling. A lot of the city is relatively flat, (with some gentle hills), the cycle path network, although not perfect, is comprehensive (more than 1200 km) and well maintained and we have Radler (the cyclists tipple of choice, more commonly known as “shandy” in the UK).

Moreover, the city is rich, well-ordered and law abiding (the number 1 accolade is nay fluke) with fantastic summers – written with no sense of irony given recent events and the return of Noah – and an infrastructure perfectly equipped, at least in theory, to support mutual and peaceful coexistence on the roads. They even have an excellent and comprehensive cycle sharing scheme. Admittedly it took some fine tuning when it was first launched more than 10 years ago (the first “honesty” scheme meant all the bicycles disappeared in 48 hours) but it is easy to use and cheap – first hour free but pricey if you get drunk and forget to take it back, or worse, where you left it. 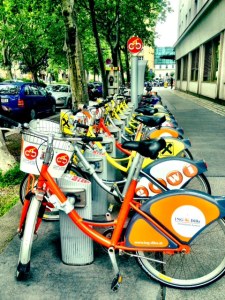 But where there is the socially inclusive, positive and optimistic discourse of the two-wheeler, not far behind giving it two-fingers and a shake of the fist is the socially inept protestations of the anti-bike lobby. Talk of the “glorification” of cycling is dominating certain parts of the Vienna based right wing press this week, and a half a million Euro staging fee of next week’s event is provoking some serious verbal back-pedalling from the communications department of the town hall to justify such a spend.

Also there seems to be a disturbing rhetoric mooching around that cycling is dangerous. This seems to me a deliberate attempt, like my insurance agent the other week, to engender a culture of fear and scare me into submission. Wear a helmet! they scream! Insurance and number plates for cyclists! they demand. Alcohol limits for bike riders! they clamour. (I have never heard of a pissed up cyclist killing anybody except themselves.)

But what is equally interesting for me is cycling seems to be such a divisive topic at the moment, and cyclists are equally likely to encounter hostility from the genteel pedestrian as they are the motorist. And I think I known why. The problem here, which I would maintain is not unique to Vienna, is that the triumph of the cycle path means cyclists are pushed off the roads away from the automobile. As badly stereotyped German speakers would say: “Das ist gut, ja?” However, the inevitable outcome is that pedaller is then pitted against walker as the cycle paths are often sited directly on or adjacent to pavements, which we have learned is dangerous when you can causally step in the path of a rapidly approaching, klaxon wielding menace. This means cyclists forget how to behave on the roads, motorists forget how to handle cyclists with any sense of fairness and care, and old ladies walking their dogs get a nasty fright.

Also, it is my feeling that a certain kind of motorist is starting to believe that roads should only be for things with engines, and seemingly cannot accept that public thoroughfares (paid through a central taxation pot) could be used by other forms of transport. Which given the need to bash out this update before the bike week leaves me flailing in its wake, is a subject we will leave for another time.

Until then, time to saddle up and hit the Ring. I have just spotted some tour buses arriving and I am dying to try out my newly converted cow-horn.