Last week reports were circulating that you could be fined for kissing on public transport in Vienna. So much so that Austria’s third television station, Vienna based ATV, ran a report on its evening news (I was waiting for one of my favourite programmes, Bauer sucht Frau) depicting some young people having a snog in an underground train. This was intermixed with cutaway shots to aghast fellow passengers, who hadn’t been to acting school, and included an interview with the deputy communications director of Vienna Transport making it very clear that, no, you could not be fined for a bit of opportunistic Schmusen on a tram, bus or U-Bahn. In short, it was, to use the vernacular of the over-sexed youth of today, hogwash.

So why did ATV go to the trouble of producing and broadcasting such a piece even when it was clear to anyone with half a brain that it was a wind up? Probably to entertain the kind of person that would watch a television programme about lonesome farmers searching for someone to kiss on the bus or anywhere else, you rejoust. Yet seemingly we have now been transported to a world where it isn’t enough just to report news that may or may not be true, it is now acceptable run an news item even though you KNOW it is not true but still pretend otherwise. Which leads me to question: (1) Has Vienna gone completely mad? or (2) Was this a cruel trick from the public relations machine of StadtWien to kindle interest in something more, how should I put this, noteworthy?

Perhaps we will never know. In any case, the puckered furore, if kissing can ever be a furore, came about in the same week that Vienna Transport launched its three-week, 250 thousand Euro campaign to foster a greater sense of consideration for fellow passengers on the public transport network (see reference to PR ruse above). The slogan of the campaign is, “Mach was du willst, aber bitte nicht hier” (Do what you want, but not here please) allied with the much hyped “Rücksicht hat Vorrang” (consideration has right of way). In other words, it is the city-state equivalent of your mum nagging you to tidy up your bedroom and remove bacterially noxious cups from under your bed. 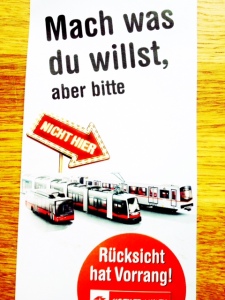 To facilitate the assimilation of these explicit messages of harmonious collective living, the city is adopting a twin-tracked approach. Firstly, a public information onslaught comprising of posters, billboards, flyers and tannoy announcements reminding someone called Herbert to take his rubbish with him. Much of these messages and their visual inception are indicative of behavioural psychology with perhaps a nod towards nudge theory. Nudge theory, you say, was ist das? Well in crude terms it is a series of anodyne reminders to try and shape public behaviour (I use something similar on my children). It can be quite unobtrusive almost paradoxically covert. But is it designed to fuck with your mind and shame you in front of your peers or your neighbours or your friends.

The second part of this process of obedience, sorry compliance, sorry, tender illumination of the collective need for public tolerance and mutual respect, will be exercised by 200 highly trained behavioural scientists from Vienna Transport. Their brief? To traverse the network for the next three weeks in search of dissenters armed only with a reflective jacket, a welcoming smile and a retinue of witty retorts. And they are going to need it. With 2.5 million passengers using the public transport network daily, this is a lot of nudges and a lot of chocolate drops.

Of course, if you know anything about Vienna, where it sometimes seems as if the conventions of public politeness are perceptibly under-nourished, this is unquestionably a noble aspiration. Then again, the capital is certainly not immune to the instructive or castigatory sign (most notable when swimming) and is, therefore, no stranger in trying to persuade people to adopt a certain philosophical or circumstantial posture. But remember, this is a place where if someone treads on your foot in a crowded underground carriage, you are about as likely to get an apology as the keys to the perpetrators house with orders to have a bath, slip into some silk pyjamas and divest the fridge of anything drinkable

But the campaign is an implicit reminder that self-awareness in confined, shared public spaces – a message I unequivocally support from my closeted private motor vehicle – is never assured. And that however much you believe you need that kebab, it is probably best not to consume it surrounded by fifty other people who want you to choke. So, as Vienna Transport would say, here are some of the house rules:

Firstly, Essen (food): In essence, it is not allowed to consume food on the network. No exceptions, even if you are a baby, or craving a burger after letting the pig out (Austrian for having a few drinks) or desperate for a piece of pathetic, flaccid pizza to keep up your blood sugar levels. It is forbidden. Enemy number one is the Leberkäsesemmel (technically a spam sandwich), the smell of which has been know to permeate lead-lined concrete. And no, just because you can buy fast-food everywhere on the network doesn’t mean you can eat it whilst I travel to work. You can buy condoms in BIPA but that doesn’t mean you can shag at the checkout (kissing is probably allowed).

Secondly, Telefonieren  (telephoning) – the message is essentially we don’t want to know what your spouse likes for dinner, or whether the boy in your class is going to chuck you and go out with your best friend or the details of that strange rash on your genitals. It’s good to share, but not that good (especially if you have a rash).

Thirdly, Musikhören (listening to music) – apparently heavy metal fans are as welcome as classical music lovers. But the rule is simple: turn it down! I can’t hear myself whinge.

Actually, come to think of it the floor of my local bus was festooned recently with flyers proclaiming “Mach was du willst, aber bitte nicht hier”. Yes, I pondered, with not undisguised middle-aged consternation, what we need, I  consternated, are some of those etiquette bouncers like the tripartite I saw last week, resplendent and cunning as they boarded the number 2 tram I was standing in, behaving impeccably. They were in pursuit of a young woman who had just entered clutching a magnificent cream cake. The woman, oblivious to all except the impending destiny of her sugary nibble, took an enormous bite and chomped happily whilst the three chaps from Vienna Transport clinically extracted their stun guns (joke). No, they watched impassively for a few seconds and then, with the diplomacy and charm that I sometimes love about Vienna, gently coaxed the cake back into the paper bag it had once called home and explained smiling and joking with the now red-faced and squirming woman, that maybe here was not the best place to stuff your face. And all it took was a nudge.

I shall leave the last word to the king of etiquette, behaviour and manners in Vienna (and most famous dance teacher) my old friend, Thomas Schäfer-Elmayer. Writing in the aforementioned Heute last week he outlined his ten golden rules for travelling on the underground. Most of it was common sense and perfunctory but my favourite was “Don’t stare. Apparently not even dogs like it.” You heard it here first (in English).