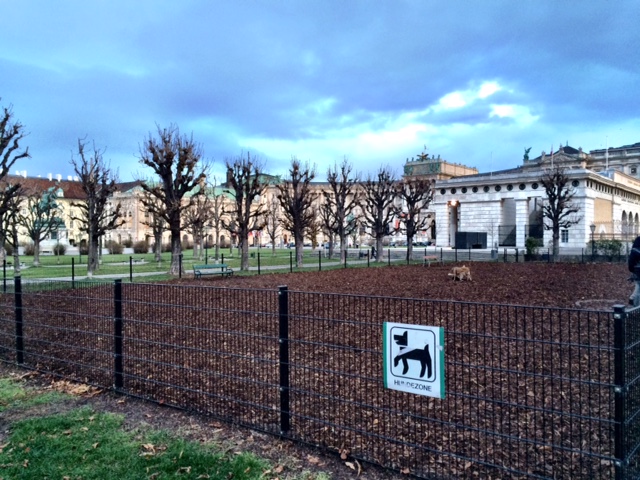 So you bought that dog, the one you saw on Netflix or YouTube. Another fashionable accoutrement snapped up on the Internet to add to your superfluous lifestyle choices. But what you didn’t realise is that part of the fantasy involved something called exercise (or walking). Then you remembered that you have a fulltime job so you dump your pooch on the parents who might let it run around their inadequate, shit-filled garden. But let’s assume you are sensible, well-adjusted and understand doggie psychology. Where could you go to run you Hund? Here are five, sponsored by Mr Waldi, Vienna’s leading dog food biscuit.

It takes some getting to but a trip to the Wienerwald (the Vienna Woods) is a must for the serious dog owner. There are plenty of places to go (avoid the areas notorious for serial killing and you should be okay) but I have opted for a south west part in Mauer, part of Vienna’s up and coming 23rd district. Up top, high on the hill, there is a copious area dedicated to the running of dogs (one of many city-wide “Hundezone”) and it is generously located next to the car-park so there is no excuse even for the more rotund canine owner unused to walking (like those humans in the film Wall-E). The area is posh, however, and all the dogs seem to have graduated from a training academy. So if you are tempted, make sure you are well-stocked with doggy treats to control your “Waldi”. Otherwise you will embarrass your new canine buddies and people will tut. Refreshment is provided deep in the forest at the Schiesßtädte. A perfect Gasthaus. The epitome of Gemütlichkeit (cosyiness).

If you MUST have a dog and live in inner city (I include all 23 districts in this definition) then the Heldenplatz is your 1st district scrubland of choice. A dedicated dog-zone awaits, although this is seemingly inadequate for most of the patrons who prefer to exercise their legs by chasing toddlers, cyclists and other social delinquents all over the rest of this historical and evocative public square. There is probably nowhere in the world which offers such architectural extravagance in the shadow of doggy doo-doo-bags so you are in for a treat. Sustenance can be obtained at one of the best outdoor watering holes in Vienna: the legendary Volksgarten Café. Although dogs are not technically allowed as it is situated within the perimeter of the, oh yes, Volksgarten (no dogs).

If owning a husky has still not convinced you that dogs need to run (huskies more than most) and you still insist on forgoing the arctic for a tiny flat, then you will need somewhere to exercise your fluffy tail-wager. Fortunately, Vienna tries to please everyone which is the reason for the specially designated dog-zones mentioned already, squeezed into some surprising places, even in the urban centre. This one, on the Wienzeile in the 6th district, is just for you then. A small, fenced off pen allowing your dog to scamper about, meet other dogs and get a modicum of exercise to assuage the conscience of the owner. The kind who thinks proper canine exercise is a scurry around the block just long enough for a cigarette and with a short stop on the way to piss on a neighbours front-step (the dog). With your five minute “walk” finished, cross the road to the Naschmarkt and warm your cockles at any of the bars or food stands. Alternatively, Café Dreschler just down the road is a good bet (dogs welcome; especially if they bark judging by my last visit).

The Prater is many things to many people and somewhere inside there is a patch of grass dedicated to the exercise of dogs. You may have to run the gauntlet of joggers and cyclists to reach it but you are a good boy/girl and understand how to handle your charge and would never let it off its leash to snap at the heels of the innocent runner. Here you meet up with other residents of the 2nd and 3rd districts, swapping stories as your respective canines sniff bums, occasionally growl and ignore your proclamations to “come here”.  Once exercised you can blow your life savings in the funfair nearby at the Wurstelprater or head off to Schweizerhaus and feast on pig. The former hunting lodge of the Lusthaus, at the end of the chestnut lined Hauptalle, is also fun and you might catch a glimpse of some of the members (all lovely people) of Vienna’s most exclusive golf club: Freudenau.

Wienerberg is ideal for dogging, sorry, dog walking, as it manages to forgo the formalised prudishness of the planned city garden whilst retaining an understated whiff of nature. This is in spite of its proximity to the six lane Triesterstrasse which cuts through the middle (one side is a golf course, the other a nature reserve). Yet given the topography of the reserve side, essentially a huge crater with a lake in the middle, once you descend downwards along one of the many pathways, the din of passing cars diminishes. The north shore of the lake is a favourite for dog owners but there are a myriad of little ways through the trees, rushes and bushes to keep you little friend happy yappy. But be careful you don’t bump into a clutch of nudists as we did one day last summer afternoon. Rising out of the undergrowth like a post-apocalyptical tribe, naked, slightly grubby and eerily silent. Although they might have been some weird sex cult for all I know. After such a fright you will need a drink. Where better than Chadim, a half decent boozer and restaurant serving its own beer. Only spoiled by the crap junk festooned walls, the smoking policy and some choice muzak. Dogs welcome!