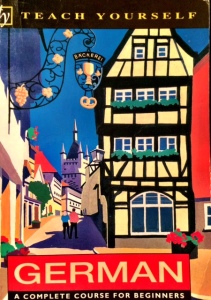 German began with the basics. How to count to ten, how to order a beer and, most importantly in that first bewildering year, how to withdraw money from a bank (no cashpoint card for new immigrants). My first teacher was my wife who was surprisingly patient when I think about it and despite her fondness for leaving cupboards open, will always be in my debt. But I was aided in this linguistic adventure in the first months by a much read self-teach German book (this predated the universal rollout of home Internet) and a course at the University of Vienna’s German language summer programme.

The month long course consisted of three hours teaching per day in the buildings of the law school. Myself, some language exchange students, a glamorous Russian, many Japanese and an Italian who I remember for two reasons:

For me, the four week course was not only a chance to acquire some basics of German, alongside the default British role of being self-deprecating and jokey, but a chance to learn some of the fundamentals of language teaching pedagogy from an experienced German tutor given my now chosen career as an English teacher. And, naturally, in the first lesson, I introduced myself as such – a teacher of language – but in reality I could have selected surgeon or plumber. I knew just as much about any of them. But this had the unintended consequence of setting me aside as some kind of language guru, especially as I was a bit older than the rest of the participants,

I cannot remember much about the course except to say the teacher did a fine job. I learned some basic phrases from language books that all seemed to be written from the same formulaic hand (many still follow this uninspiring style). And I was exposed to the fundamentals of German grammar and the “case” system which to this day still eludes me as we know.

What I do remember, however, in that first year was my admiration for other expats who could seemingly speak German, some very well. Did it take you long to learn, I would ask? About six months came the reply (bastards). And so my confidence remained buoyant and I knew it would only be a matter of time before I had graduated beyond simple words, numbers and how to order a big beer (I didn’t realise at that stage how long).

Fast forward a couple of years and I am still mostly speaking English in spite of my intention from the very start to speak German, especially in situations where it might have been almost arrogant to do otherwise. Yet the local lingo was proving to be an obstinate foe in spite of attending further formal German courses through the language school I worked at. All was not lost, however. To paraphrase the great Comte De-Frou-Frou from Blackadder, I could order coffee, deal with waiters, make sexy chit-chat with girls, just not take a physiology lecture or direct a light opera.

Indeed, I have heard it often mentioned, most often by those cheeky blighters from that pillar of international relations and tolerance, Germany, that if you want to learn German don’t move to Vienna. Certainly, the stuff you see in those German language books and the kinds of accents you hear from teachers trained in the art of Hochdeutsch (standard German) bears about as much resemblance to the local Wiener slang as I do to a champion bear wrestler.

Now before we go on, a point of clarification concerning Austrian German and German-German. Standard and formal uses of both are virtually interchangeable. However, Austrian German trumps German-German for the simple reason of elegance (this is the opinion of all Austrians). In an interview on American television last year, actor and perennial baddie Christoph Waltz – who likes to play down his Austrianess – was asked what was the difference between Germany and Austria. Like comparing a battleship to a waltz, he replied. He could have easily have been describing the differences in spoken language. One is bombastic, fractious and joyless. The other, melodic.

The Piefkes may consider themselves the gatekeepers of the Germanic tongue but they are right about one thing which I begrudging concede. Some of the Viennese you hear is, even to those with an appreciation of German, is unintelligible. Your only chance is to leap on particles of sound. Acting as clues within the context you find yourself. If you are standing at a supermarket deli-counter buying ham, they are not asking you what you think about the rights of man and moral vicissitude, at least not in my local Spar. Or a simple example in the number 2. In standard pronunciation one should say “zwei” (rhyming with “eye”) but in Vienna, “zwo” or even “zwah”. But once you are familiar with the specific sounds then it should be straightforward.

Yet this is always almost the same in English or any other language. Outside the formalised classroom, variation in accent is maddeningly diverse and so one true standard may exist but this will not necessarily help you anywhere much. For example, I have lost count of the times that business people have confided either a preference for the British or the American English (they mean accent) with the other being more difficult to comprehend. The reason? Simply a matter of education and exposure. And often repeated contact one way or the other, in either country or through that country’s media.

Of course, nowadays I have another reason to maintain my English: children. Children are very clever (devious). Quite often you have to give them a reason for doing something. That reason could also include a bribe such as a sweet, cash or internalised self-interest. With language it is the same process. If I give them the inkling that I can understand and speak German (my version), then there initially is very little incentive to use English. And if anything children are consistent. Why make it hard for themselves? As they learn to speak they obviously do not yet see the advantage of speaking more than one language. So, I have to maintain this charade that I don’t speak German thus forcing them to rely on English. And it mostly works although there is a lot of inter-mingling – the so called “bleeding” – and at times more mangled syntax than an EU summit.

But my older child, on the cusp of secondary school, is now fully aware of the potential of the language of my birth. His first language is in every sense German but he is bilingual. And then on holiday last year, a revelation. In the hotel we were staying, our “designated” waiter, a lovely chap from Rumania, took great delight on discovering we weren’t German and he could speak English. This impressed the kids and made them realise that English was probably quite useful.

So where are we now? I think the best way to illustrate my contemporary German ability is by way of an argument. Specifically with the family of dungheaps who live next door. In my many altercations since they moved in two or more years ago (mercifully none in the last six months), halving the price of property overnight, gaps in my German knowledge were, how should I put this? – conspicuous.

A verbal stand-off is stressful whatever the circumstances but the demands are magnified when one is compelled to do so in a second language. The semantic speed, trickery and wit available in English (only English has these attributes) become increasingly difficult to reproduce. And this means you don’t have the time and sophistication of wordplay to ensure an effective and meaningful impact. Moreover, because of the expected speed of exchange, you are processing counter argument and insults whilst trying to retain coherency with your responses and reproduce sentences that follow basic rules of grammar. If only to maintain any sense of clarity and judgment. I admit, it sometimes fails, you resort to English and your German is exposed for what it is. Inadequate.

The son-in-law of the family, an individual of unrivalled pallor, exceptional lack of intelligence and attire that is anything but dapper, once goaded me as we argued about his inertia in all things dog-related that because I live in Austria, I should speak German. “Wie, er, gush Wappla?” I asked in one of my better interventions (it means in Austrian German, “Like, er, shut up, twat?”).

But the aside is telling. When a native of a country resorts to the “you live here, you should speak the lingo” line, you know you are dealing with an intellectual molecule. My six year old son has a richer and more varied hold on German than this irrevocable dullard in his early thirties and yet Kapitan Dynamic feels it necessary to lecture me about my ability to communicate in his mother language. It is essentially a way of shutting down discourse, in this case argument, but reveals the simple truth that such proponents know they have exhausted any logic and reason inhabiting their tiny minds. And all you can do is walk away and an hour later construct perfect retorts in your head. Sarcastic and clever. With a suddenly recalled depth of Wortschatz you never knew you had. And with flawless grammar.