For the last two weeks of the school summer holidays, I have heroically volunteered to remain at home and look after the Kinder. Like most modern parents, in the number one city or elsewhere during the summer shakedown, I am feeling the heat. There is an almost invasive need to keep them, by hook or by crook, entertained and failure will result in degeneracy and guilt.

Yet nothing captures more the spirit of the law of diminishing returns than the largely fruitless task of manufactured child fun. The more you do, the more wealth and splendour you unleash, the more they complain how bored they are. It is akin to the acquisition of more money and any correlation with happiness. We as humans are highly adaptable and respond almost instinctively to the powerfully positive emotions offered by short-term reward. But once those basic needs are met the effect, the “good feeling” if you like, is short-lived and only relieved (temporarily) by more stuff. In short it is a fallacy. Just ask a junkie.

Likewise, bombard children with activity after activity and they will after a very short time adopt the attitudinal status of social paralysis and everything is tedious because there is no serendipity (and minor injuries). The same trick applies to buying toys. Virtually every parent, at every stage of child development, good judgement suspended by fatigue and insecurity, is tricked into believing that the next toy will be the holy grail of play, buying the parent momentary tranquillity. But it is like chasing the pot of gold at the end of the rainbow. You could buy all of Hamleys Toyshop in London, filling plastic boxes with all manner of tat and other pieces of Lego and still the only thing your children will find of repeated interest is fighting with fifty cent bamboo canes in the garden.

My idea of a good morning out in Vienna with the kids is to hop on the bus and tube into town, go to a bookshop, get a couple of books, have a coffee and a cake or an ice-cream and then head home. Although, I have partly revised my opinion after a rare trip to Café Diglas this week and a bill totalling a quite ridiculous twenty-six euro for two hot chocolates, a coffee and two cakes! Alternatively, I would choose to go to a putting green at a golf club. Now you might think that golf is a preposterous sport, as are the people that play it. And I wouldn’t always disagree especially with some of the trousers people wear. But for half the price of a ticket to the mediocre Aqua Terra Zoo downtown (more later) or Bogi Park (soft-play for the soft-headed) I can chip and putt with the kids for as long as we like in the fresh air and sunshine (wind and rain) and afterwards never ever think, you know what? That was a bit crap! Incidentally, this does not include mini-golf or its deviant off-shoot, crazy-golf. Although such pastimes are a reminder that God has a sense of humour, it is evidence of decay, both moral and structural. It is the failed-state of sports. It is an abhorrence and if you mention it again I will presume you are socially delinquent.

However, like the built in obsolescence of most modern acquisitions or the service at Schweizerhaus, I am fallible. I know that friends, fulfilment and any flourishing sense of satisfaction and well-being are not for sale. Yet incapable to resist, I succumb, hypnotized by circumstance and an emergent mood of seasonal desperation (boredom). And so where else to begin but the highly “recommended” Children Museum in der Stadt.

The Kinder Zoom Museum is located in the Museum’s Quarter in the seventh district. The exhibition space is divided into various zones and given its popularity tickets must be reserved in advance. That said, you can just turn up hoping for a cancellation but it is a bit like standing outside the Register office hoping for someone to marry, so it’s your choice.

For our visit we reserve space in the “Ozean” section. We arrive and remove our shoes (this raises my suspicions). Then we are led through with several other families and our one hour tour begins. First we get to sit down on some tiny steps and cushions not designed for western European backsides and then listen as our guides explain in English and German what we are about to see and experience – all ocean stuff, a boat, a submarine, a rain forest. A rain forest? Then for the next 59 minutes, the kids, with eyes like giant Octopuses, are unleashed and off they charge, rampant and expectant.

After ten minutes my older son pronounces: “This is boring!” and although I try and crawl under a giant, fabric seashell to escape situational censure, I comprehend these words. The exhibition is well built, in a compact space with bright colours and some buttons to press and equipment to pull, but there is no “museum” as such and very little attempt at any context to keep anyone over four occupied. And the guides? They mostly sit around gazing into the distance as if stranded on a desert island, silent in solitary thoughts of escaping the torture of Sunday afternoon families demanding distraction.

Feeling press-ganged by the hype and amplified by a mixture of disappointment and discomfort, I turn to Mrs Barratt and whisper that this place is just posh indoor play for posh kids. She nods, mutely, checking her watch. I sense that sinking feeling and search for a plank. Only another forty-nine minutes to go. 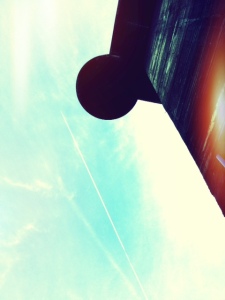 Strategically placed around Vienna are several huge Flakturm (anti-aircraft towers). The towers are infamous architectural survivors from the Second World War providing a haunting reminder of Vienna’s roll in the latter part of the last conflict before Austria became neutral in 1955 (at the behest of the departing Russians).

In the 6th district overlooking Fritz Grünbaum-Platz, one such tower looms large and menacing with a grotesque concrete edginess not immediately equated with traditional chocolate-box Vienna. Inside is the Acqua Terra Zoo housing ten thousand animals and twice as many children. I have lived for seventeen years in Vienna and until last week I had deftly managed to avoid going inside. I once tried on a wet Sunday but the queue was communist and since then I have never seen any reason to try again. However, too much time on your hands can make people indiscriminate and sloppy and, in any case, except for showing me round a flat, I had never seen a shark.

So, for the princely sum of twenty-five euro (one adult and two children) we get to look all your favourites from Finding Nemo (fish, turtles, stingrays, sharks), some crocodiles, exotic birds, monkeys, insects, various reptiles and everything in between that can be safely, if not ethically, kept in heated glass boxes with powerful lights. This also includes some very large snakes giving me the opportunity to warn my youngest that if he doesn’t behave, he will end up like Dudley in Harry Potter.

After ten minutes my older son announces, “This is boring!” and I sense a pattern emerging. So, climbing through the claustrophobic, muggy and airless interior, we make our way up many steps, past hitherto uninspiring displays reminding me of the fish shop Gruber at Naschmarkt. We take refuge on the wide expanse of the viewing platform high above the street and once home to large guns. This bit is actually quite good, offering a magnificent 360 degree view over the parapets, cupolas and loft apartments of Vienna. At this height you begin to appreciate the incredible scale of the building and what it stood for seventy years ago as Vienna came under aerial bombardment. A sense heightened by the presence of powerful binoculars which I use to seek out roof-top sunbathers. This is not quite worth the ticket price alone (the views not the sun-worshippers) but it comes close.

We transcend higher to the café and the children ask me what monkeys drink. Banana milk-shakes, I quip, so we order two. Sitting high up there with glass panelled walls I feel quite woozy, more so when the bill for the milkshakes arrives.

We leave shortly afterwards after an interminable wait for the lift and emerge on the ground floor passing quickly through a piss-poor gift shop stuffed with high-priced soft toys and other accoutrements of plastic Klumpert (junk). As we make our way through the Esterhazy Park back to the underground, sitting and drinking in the shade, adjacent to the kids’ adventure playground, is a motley crew of smiling street Mensch drinking happily. I nod appreciatively. Real nature, I thought. Liberated and carefree.

By now my expectations of museums have been pruned, but our trinity of visits concludes with Heindl makers of fine chocolate in Vienna since 1953. I have passed their factory and chocolate museum in the twenty-third district many times over the years and never really paid it much attention. But I have always fancied being Charlie Bucket. So we sign up for guided tour and “workshop” (the now ubiquitous twenty-five Euro for one adult and two children) and wait for our golden ticket and life-time supply of bonbons.

Three things disappoint me: first, in our over-size tour group there is no fat boy from Germany or spoilt princess from Buckinghamshire. Only ill-disciplined, chatty adults scoffing away at the free goodies, ignoring the guide trying her best to sell the story of the coca bean. Second, you only see a tiny part of the production itself, bolstered by some dreary corporate videos which provide absolutely no real sense of contemporary setting or scale or history. Admittedly, we get to see a “production” line of goodies (all hand packed incidentally) populated exclusively by women under orders to smile. I scrutinise them through the glass panel and wonder how much they must be sick of chocolate and jelly sweets. But it is meagrely revealing and I still haven’t seen a cow being whipped. Thirdly, a large part of the tour is taken up by another “film” housed in a special cinema and all the way through it I kept thinking, couldn’t they have just sent me the DVD and I could have watched this at home?

The only interesting part of the tour (for children anyway) is you get to make some sweets (Pralines) which you can take home. But it is then that you appreciate the reason for the admission fee, especially once you see the museum part (which tries hard but is unexceptional).

The tour and museum aspect aside, I cannot help but feel admiration for what Heindl represents. A medium sized family company continuing to exist and flourish in an unremarkable part of Vienna in the year 2014. Retaining links with the local economy, employing local people and not cynically chasing the corporate dollar in a cheaper overseas location to cut costs and boost profits. The family are clearly passionate about their products and their customers and for this I am both impressed and charmed. And, I notice, with a seriousness that surprises me momentarily, they are looking for a guide who can speak English. I wonder.