Hot on the heels of last week’s local election in the traditional Conservative heartland of Upper Austria, where the far right Freedom Party (the FPÖ) achieved a stunning 32% of the share of the vote, we bring Robert J. Barratt’s exhaustive guide to the parties and their messages here in Vienna, staging post for migration in the year 2015. The election is on the 11th of October.

The Social Democratic Party (SPÖ) has dominated Vienna politics for twenty years in spite of sharing power these last four with the Marmite party of Austrian politics, the Greens. This domination is part of the appeal of the growing strength of the main opposition FPÖ, as there is a sense in the city that this concentration of power has led to an inseparability between the party and the essential elements of the city infrastructure. In other words, when political affiliation becomes intrinsically entwined with advancement or business or the social-city fabric which benefits from such alignment, people inevitably become uneasy (jealous) and the main opposition parties sense an opportunity. Leading to that famous retreat into the universal human condition which asks: “Why should they get all they cake?”

Of course, jobs and flats for the boys is nothing new in Vienna. And it does not necessarily denote corruption as laid out in the opening page of the FIFA Handbook of Discreet Brown Envelope Exchange. Yet there is every feeling that such unsaid emphasis on political membership is the grease that continues to lubricate influential “transactional life” – both business and private – and SPÖ supremacy simply exacerbates this (which is why I have joined the party).

When Heinz Christian Strache – populist FPÖ head and the only challenger this time round – is not banging on about migrants (see last posting) and suddenly his love of Vienna, his political rhetoric cannot resist reminding the people of the city about this quasi-corrupt relationship. It is a key part of his appeal or certainly his party. I say that because although there is a sense that the reds have made themselves a bit too comfortable, Häupl, the incumbent mayor and battle-weary top dog, is broadly popular and if there was a direct vote for who should be city chief tomorrow, then he would win. The reason for this is really quite simple: under his leadership Vienna has flourished and apart from my pisspot of a neighbour, things are, in spite of the city debt we sometimes hear about, well, mostly agreeable.

This contrasts with Strache. The FPÖ are heading for second place (or is it first?) but given a straight choice of mayor, Häupl would crush Strache easily, evidence of his much broader cross-party appeal amongst the electorate. Of course, Strache is also head of the national party (Häupl only in Vienna although in reality he is the most important social democratic politician). But they have a strange concept in Austria where heads of national parties can also stand in local elections (and vice versa). No one has ever really explained this system to me whilst offering any in-roads into sense. Speaking of which, here are the runners and riders (and some donkeys).

The Reds (Socialists, The SPÖ) – “A feeling for Vienna” 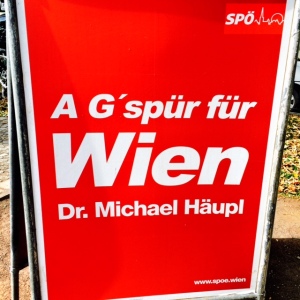 It must have been hard for the communications team down the town hall to have developed an original electoral campaign when the city in 2015 is in such comparatively rude health (or so the 150 million Euro political marketing budget for the city keeps reminding us). But it goes to show that even if you present citizens with global heavyweight life-quality, there is always somebody who is never, ever satisfied.

As such, the inception of the SPÖ billboard campaign placed life quality at its heart. But it began by asking what is the point of this Lebensqualität if there is no job, or affordable housing or social provision? Which is a bit like asking what is the point of an Armani suit if you walk like Quasimodo? And so we get the usual guff about a resumption in the construction of social housing (remember Vienna is the biggest social landlord in Europe), more jobs (all the politicians are promising this) and Irene Cara (see below)

But the key message of the campaign is about having a “feeling for Vienna”. This suggests that to run the city effectively is not just about political, social and economic experience, but that intangible quality that separates the good from the exceptional. Put another way, if you ain’t got it in the hips, you better have it in the lips. No one can explain this feeling but you know it when you see it. Like the presence of a true leader. Or a great piece of music. Or unexplained sexual attraction.

Michael Häupl is also appealing to his inner Wiener (hidden beneath his manifold chins) by the use of such phrases, when speaking about the policy of free kindergartens, as “Da lass´i ned mit mir red´n”. This is Wienerisch in all its glory. It says (not literally) I am one of you. I speak to you. I understand you. And please don’t vote for that lower-middle-class oik, Strache.

The FPÖ have been making systematic gains for years, propelled by a suspicion of the EU, too many foreigners and the seditious effects of Islam. This time round they are predicted a third of the vote and will be the second biggest party in the city at least. They will not hold the balance of power because the reds, greens and perhaps the neo-liberal pinks (the NEOS) will out-gun them, but they are becoming increasingly difficult to ignore.

They began their campaign promising an “October revolution” a coded reference to the Bolshevik uprising in 1917 Russia which lead to civil war, totalitarianism and torture for thousands of UK sixth formers taking A/level history. So the omens are good although for your typical FPÖ knucklehead voter, an act of revolution probably signifies a switch from local Ottakiringer beer to local Schwechater beer.

Since then the messages have been coming thick and fast. As is the politics of the opposition they promise everything and more including much which seems eminently rational (if it were only possible). Here are some about the mishandling of the economy and the rumoured 5 billion city debt since 2010:

All very sensible. But as the opposition they can speculate all the want with language and policies. They are not judged until they achieve or fail. So they can pledge almost anything: free hair transplants for bald people; tax on foreigners breathing Austrian air; triple pay increases for English language teachers. And people lap it up.

But what they forget is the last time the FPÖ were involved in power. Their former Finance Minister, Karl-Heinz Grasser (double first names are all the rage in the FPÖ) is still in court over allegations of corruption dating back to the early noughties. And let us not forget the Hypo banking scandal. An FPÖ project which nearly bankrupted Austria.

However, memories are short in matters of the state purse. We re-frame the myths and stories to suit our needs and expectations now. And at this time there is only one issue that really matters: the migrant crisis. The FPÖ and their leader have to do nothing except reassert their public political discourse with gentle reminders on vast roadside billboards about illegal immigration and a porous EU. So much so that all we are waiting for is the rollout of the soundbite that really matters: “Ich habe Ihnen das immer gesagt” (I told you so).

The Greens (the Greens) – “Painful but effective”

The Greens, more than other party, invoke a sense of electoral polarisation. You either buy into their more inclusive, happy-clappy view of the world or you view them as an inner-city, elitist freakshow bent on bonkers ideas that will condemn us all to bicycles, crap shoes and fruit tea. There is generally no fence sitting (recycled wood, of course).

As junior members of the city coalition these last few years they have had little to do except take the blame for the cost and redesign of the Mariahilferstrasse (this still annoys plenty of people, although mostly those that never go anywhere near the street), champion public transport and paint a few parts of the street surfaces green for hard-pressed, law-breaking pedal pushers which curse our roads (if you think like a motorist).

Back in the early noughties I used to teach the head of an insurance company. His office was just outside the first district in what I am sure was a former palais. And I have rarely seen such opulence in the many fruitful years I have been chatting for a living. Anyway, he often used to chide me for being Green because at that time I lived in the 6th district and sometimes cycled to his office (I soon gave this up after realising turning up with a face and body adorned with perspiration was not the best look for someone who had the ear of the Prime Minister of Austria).

Nowadays I can’t meet the expense of being Green. Their concentration of power emanates from the 6th, 7th and perhaps 8th districts where a modest sized flat will cost more than I can probably earn in the rest of my working life. Which I believe heralds the root of the Green cause: their limited appeal beyond the inner ring-road of the notorious Gurtel. In short, I have to suffer in the suburbs whilst being Green is for middle-class people that can afford to be Green. Or students with nothing better to do except obsess about their internship.

And their campaign slogans? Something about the Green party “working, working working” (in the effective sense), an end to rental sharks, justice for women and best of all, a rather provocative poster portraying a party member showered in kisses with the tagline: “Up for anything!”. It is a poor play of words in German alluding with the use of the “Offis” their commitment to public transport. But hey, this is Vienna, we love diversity. Especially swingers.

The Blacks (ÖVP, the Conservatives) – “Time for a change of course”

Like the national election of two years previously, the ÖVP are stuck somewhere on the political barometer of appeal between those titanic electoral bellwethers of shit and shite. Their messages are muddled or would be if they had any. And so all we are left with are some cackhanded promises to support the motorist, preserve grammar schools and, of course, create jobs (strange that you never see politicians promise to reduce jobs). Their campaign is so uninspiring and their main candidate so undistinguished (apart from a spectacular nose stolen from Mr Punch) that I can’t even be bothered to comment.

The Pinks (The NEOS)

Storming into the national Parliament two years ago with nine seats (proportional representation at its best or worst depending on your choice of newspaper) the NEOS are the liberal punks of the Austrian political scene. It is unclear at this moment how or why or when they have made any contribution to the betterment of Austrian society but they have nice balloons.

The campaign USP is that they are “fighting for our future” which is reassuring. How they could fight for our past is never really explained … but they have nice balloons. In any case, it would be difficult to vote for a party whose campaign bus was driven by Inspector Clouseau into a swimming pool in Return of the Pink Panther (the second one in this short clip) which I fear says it all. Then again, they earn a bonus point for campaigning in English with the poster extolling us to “fuck fight the system”. Not sure who the target group is, though. English speaking expats – even long-term ones – can only vote in the district (busy-bodies) and not directly for the city rulers (better connected busy-bodies).

And with that I’ll see you at the polls (or not).