Just when you thought it was safe to pack away your dancing shoes, lurking round the corner of the number 1 city is an annual event that has been redefining all notions of May Queen for the past twenty years or so. 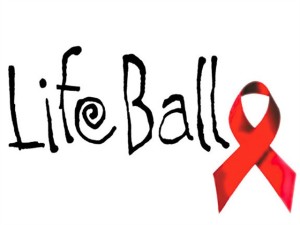 The Life Ball is the centrepiece of the Wiener ball calendar, deserving its billing as one of the biggest, brashest and coolest charity events on the planet. This is not just 21st century, schnapps induced hyperbole – well it is, but this is my blog – but May would not be May in Vienna without it. So much so that it dispels beautifully any impression that the capital of Austria is rooted in tradition, chocolate box fussiness, conservatism, complacency, fur coats and the oft read cliché that it lives on past glories (which much like my vocabulary is poppycock).

It is fair to say that Wolfie Mozart (Amadeus to you) knew a thing or two about going on a bender. And it is my firm contention that given the choice he would turn his powdered nose up at the splendid grandeur of the Opera Ball (tradition, elegance, no-listers and no-hopers) and instead take a short tram ride round the Ringstrasse to the hottest and sexiest ticket in town.

You have of course heard of it, but just in case it has eluded your reminiscence momentarily I shall oblige. In a nutshell, it is an all-singing, all-shaking, all dancing, gay friendly, 4000 ticket party raising awareness and money (2 million Euro in 2011) for the fight against HIV and AIDS. It was the first charity event of its kind in the world to be held in a public building, the Vienna Rathaus (town hall), and it attracts big name guests – Clinton, Elton John, er, Katy Perry. In the words of the official website (www.lifeball.org) it is:

“A big event with a serious background – celebrating the joy of life and the diversity of cultures, Life Ball unites the Viennese ball tradition with opulence, extravagance, glamour, provocation, fancy performances, committed speeches as well as emotional moments.”

The most prominent part of the ball – this year’s motto: 1001 nights – is the opening ceremony, a parade of the powerful and connected, local politicians on the make and costumes to make Lady GaGa go gaga, and culminates in the Life Ball fashion show featuring regulars from my wardrobe (Gaultier, Roberto Cavalli, Donatella Versace, Vivienne Westwood, Missoni). In short, the Life Ball can do no wrong and it would take an argumentative sod to say otherwise. 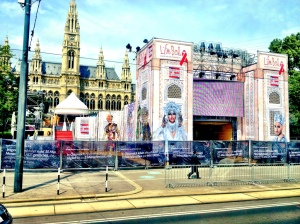 Given the amazing work it achieves in promoting discourse and raising money about HIV and AIDS it would seem counter-intuitive, then, to try and tease out elements which I could tentatively critique. But this is what I’m going to do. Why? Firstly, the event seems almost unimpeachable (probably the Clinton effect).This is just not human and we are genetically programmed through evolution and exposure to reality TV shows to linguistically lob stones at anyone or anything which gets too successful (a trait I admit may derive from being British); secondly, it is my duty to question everything (please don’t tell my children); and thirdly, I want a ticket, and by writing this someone might invite me along to prove conclusively that the event is essential and unmissable. So here goes (continued on next page) …