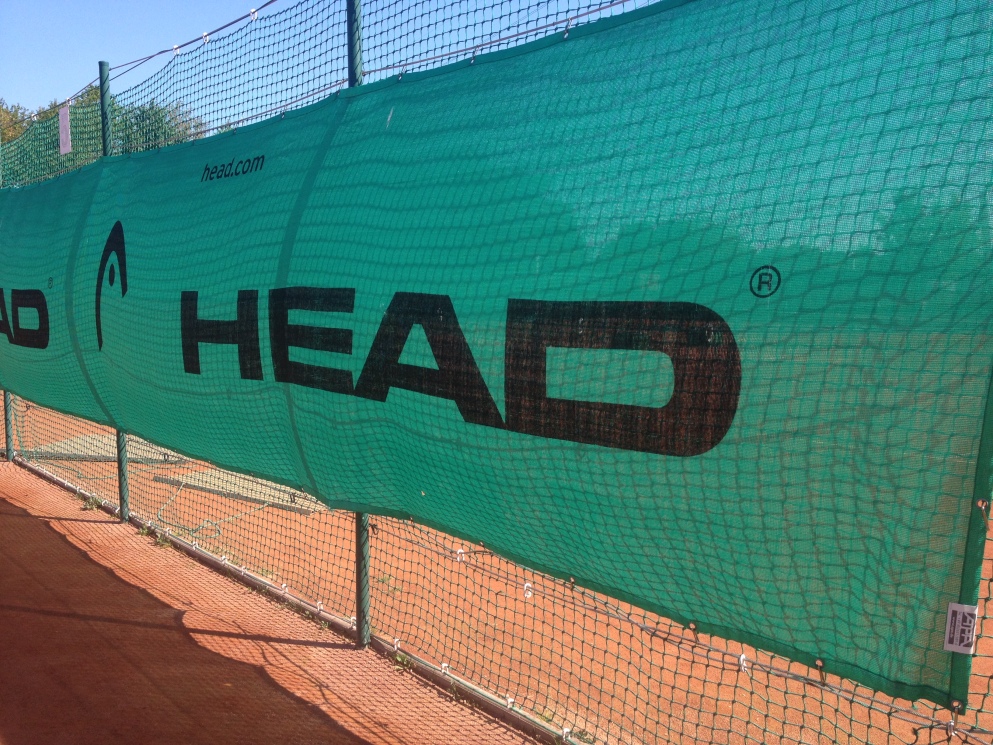 The chance to play tennis began outside my childhood home. Each year in June with the onset of Wimbledon, my brothers and I would draw a chalk tennis court on the cul-dec-sac in front of our house and pretend to be John McEnroe, Jimmy Connors or Bjorn Borg (and one year Roscoe Tanner).

Adherence to the rules of tennis was made possible even without a net, more so because this being the 1970s, streets were not plagued by the intensity of cars as today. Also we lived on an out-of-town 1970s housing estate, new built homes, front and rear gardens, amidst open spaces and greenery perfect for exploitation by a gang of boys and their bikes and ball games (we also used to hit golf balls from one green area to another which may have upset our neighbours and their rose bushes). Many of the people on the estate were retirees in search of sunshine and peace. Sometimes the sun did indeed come out. But I suppose this is why I now live near a family of screeching bastards; pensioner payback for the all the racket we engineered with our racquets, daredevil attempts to emulate Evil Knievel on our bikes over ramps of  wood supported by paint pots, and those numerous cries of “Fore!”

Fast forward a couple of years and my first experience of a real court came courtesy of big pharma. Whilst at primary school, around the age of nine or ten, I completed a couple of cricket courses earning bronze and sliver badges which were then sewed badly, by me, onto my cricket jumper. It was through this that my mother was contacted by a chap asking if I wanted to play for the under-12 cricket team for a local sports club who was on the lookout for new players.

The team happened to go by the name of Pfizer, the American pharmaceutical giant, unknown to me at the time and long before they made it even bigger with Viagra. The company had its European headquarters not far from where we lived and back then, like many of the big American banks in London, huge corporations often had magnificent sports facilities for employees. And so, by virtue of playing for the junior cricket team, we were also allowed to use their sports complex and all its goodies.

Credit to my late mother, divorced and only recently a driver (both were traumatic for us), she would ferry us back and forth to play cricket and tennis and squash. She was never pushy and ambitious but simply seized the chance to give us another sporting outlet (my primary school was also sport mad) and as she put it, “To get you out of the fackin’ house!” And we loved it. Immersed in a grown-up world of real sport, protecting our balls (tennis) with a passion that now seems obsessive, although financially necessary, and always the promise of a coke and a bag of crisps to round off our visit as we played snooker or Galaxian (early computer game) in the smoky bar.

I eventually gave up the cricket club as secondary school took over and my weekends from September to June were filled with representing the school at various sports. This had two advantages. First, I was very fit and out of the fackin’ house a lot. Secondly, I got to meet people who lived in the parallel world of the private school system although this had the unfortunate consequence of turning me into a Marxist before I had heard of Marx. However, we had to give up the free tennis and the snooker. But hope remained in relocation.

By my early teens we had forgone suburbia and moved downtown, to a largish Victorian house spread over three floors whose windows would rattle when a bus passed on the main road outside. Chalking up a tennis court on the tarmac on this street would have aroused the interest of social services and probably vexed the bus unions. Fortunately, the town boasted some municipal courts, more or less maintained and serviced by a chap in a small hut. But my mother had other social advancement ideas. Yes, we were about to integrate ourselves into the community and become members of the culturally elusive lawn tennis club.

This was made possible due to a good friend of my mother who got us on the waiting list. I say made possible because back in the day when a seventeen year old Boris Becker was about to storm on to the tennis scene and win Wimbledon, access to such clubs seemed rather select, ostensibly in an attempt, as I reflect on it now, to maintain something called standards and, crucially, to keep out the oiks (myself and my brothers). But join we did and soon we were playing on the hallowed turf with coaching from Mabel (Miss Maple’s distant relation) who dressed and played tennis like someone from a silent movie.

And so, in that first season, we played incessantly. Yes, as “juniors” we were often relegated to the furthest courts from the clubhouse (glorified shed) where the grass was maintained to the highest standards of occasionally cut and the lines scarcely re-painted. And yes, we were always offered the worst balls in a despondent string-bag, assuming there were any balls in it. And yes, there were many insufferable rules and obsessions with etiquette and dress (we had to wear white like that other important club in London’s SW19) and the “committee” were officious but I suppose well-meaning. But we were happy. And my mother was happy. She would sit on the sidelines, social climbing, mingling with her middle-class comrades, clapping and supporting our matches as we crushed all in our path with our cheap wooden racquets and upwardly mobile aspirations.

Yet even then I could sense the imparity between the adults and kids. If this suburban club brazenly maintained a hierarchy of access to the best facilities, essentially pushing the juniors to the equivalent of the warm up courts, it was easy to understand why Britain struggled to produce a world class performer. And being a stroppy teenager with a chip on my shoulder the size of the English Channel, this both mystified and vexed me.

It is important to remember, just for context, that thirty or more years ago, and decades before that, the tennis community in Britain was desperate for a home grown men’s champion who could rival the best in the world. But it took another thirty years for this to happen. Admittedly, in between there was Greg Rusedski but he was Canadian. Or, around about the same time, Tim Henman who rose to a credible world number 4 between 2002 and 2004. However, the only grand slam where he made any impact was Wimbledon which he never won, famously losing in four semi-finals.

And then along came Andy Murray winning the US Open in 2012, becoming the first British male to win a “slam” since Fred Perry in 1936 and all seemed right with the world. He followed this up with a win at the All England Club in 2013, a feat he repeated in 2016. As such, it would be easy to think that Britain had turned a corner and cracked the elusive route towards men’s tennis success. But as talented as Murray clearly is, his success was no fluke, driven arguably by two not unrelated factors. First, his mother was an LTA (Lawn Tennis Association) coach and no slouch of a player herself. And second, in his teens he went to Spain to sharpen his talent on clay. But the question remains:  why did it take so long? (I think I already know.)

For comparison, in the period between doing my Becker impression on grass until now, Austria, with a population about seven times smaller than Britain has produced five top-twenty players. There was the late Horst Skoff who reached number 8 in 1990. This was followed by the “King of Clay” Thomas Muster who was the number one ranked player 1 in 1996 (I once saw him in the Vienna first district pub 1516 – one of the original craft-ale boozers before the word had been invented – drinking whiskey and smoking Marlboros). Then there was Stefan Koubek in 2000 (world ranking 20), Jurgen Melzer (number 8 in 2011) and, as I type, the new great hope and  French Open semi-finalist in 2017, Dominic Thiem (currently ranked number 8). This is not to say that these players might also have had a notional leg-up to reach the top and could be equally freakish like Murray. But it is my contention that wider structural advantages in terms of access to facilities and their shear ubiquity might have something to do with it. In any case, unlike in skiing where it helps if you have a mountain, there is no obvious geographical or climatic reason why Austria is arguably more successful than Brexitland when it comes to top-spin, ground-strokes and jokes about new balls.

In part two, then, you will find out what this has to do with the capital of Austria and examine why a small country more associated with winter sports can often punch above its weight in tennis terms. In other words, why I think this can happen with specific reference to tennis in Vienna where I have gone from badly worn grass to some of the best, possibly world class, facilities in the capital. More importantly we will learn what happens when a 15 year old unleashes a linguistic serve and volley of abuse at the treasurer of a traditional English lawn tennis, using some choice words normally associated with class rivalry, the act of procreation and political kinship. And in doing so, ultimately killing off his dreams of grand slam glory in one glorious stroke.