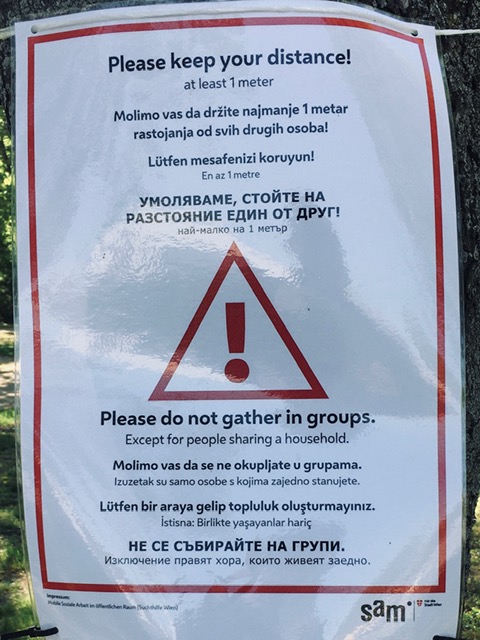 Although the stay-at-home experiment in Austria is already into its sixth week, there are definitive signs that things are returning to what they once were. Smaller retail spaces, DIY stores and garden centres, with strict restrictions on numbers of shoppers and the now obligatory face masks, have reopened and there is noticeably more traffic on the streets. McDonalds, so pointless since the middle of March, has resurrected some of their drive-thru restaurants and the country breathed a collective sigh of relief (through a face covering) that reconstituted beef was back on the menu. And although home-schooling continues with all that this implies (some creative hotdesking, the requisition of my printer and a morning assembly where I hold forth on the important ethical issues of the first Austrian Republic), there are even mutterings that the young’uns might get the chance to partially return to some kind of formal schooling sometime next month.

Until then, and in the weeks and months to come, it will be interesting to see how much of the sights and sounds of the great spring lockdown of 2020 will be remembered and indeed what might change. Certainly, there is much speculation that societal structures as we knew it will be transformed, whether it is approaches to work, how we move around, what we mean by community, how we value certain professions and the role of the state in maintaining or protecting the essential facets of modern life. It’s tempting to think that there will be a radical re-think about some or all of these themes, although I suspect that many people will simply revert to most of their old ways of behaving and thinking BC (before Corona). Then again, we have seen some examples of revolutionary transformation already.

With all this social distancing and enhanced awareness of shared space and the people using it, it has finally taught the citizenry of the number one city how to queue. Admittedly, they needed a helping hand by many brightly coloured stickers and gaffer tape on the floor indicating where people should or should not stand, but you have to take the win where you can get it. Equally, it has signalled – for now – the extinction of the one phrase designed to spook any Brit when out shopping in Vienna: “Nächste, bitte?” (Who’s next?). Not even the most wily of Viennese could now claim they were “next” when standing two metres behind you and possibly just outside the premises (although I wouldn’t put it past them to try).

And what about the effortless switch to covering your face? Since October 2017 (a more innocent time) covering your face in public in Austria has been, give or take a few exceptions, forbidden: for festivals and special events (like Carneval, being led from a courtroom or when I am about to meet my neighbour in the supermarket); when very cold; or … oh wait … medical reasons. However, I suspect when the Kurz government of the time were defining the true scope of “medical” they may not have envisaged a global pandemic triggered by bat soup. Yet, now hiding your face is as culturally acceptable in Austria as being unable to locate the back of the queue. Oh no, wait, that doesn’t work anymore … as queuing like a Brit in Austria.

Moreover, it will be interesting to see if looking like cattle-rustler or Dick Turpin will become the cultural norm. Well, I suppose it already has. So much so that cottage industries have suddenly sprung up selling homemade fabric masks (which can be washed) in an assortment of different designs and colours. We bought some from our local tobacconists although we were a little bit unsure about the hole in the front for a small cigarillo.

Meanwhile, over on the Wiednerhauptstrasse, the Vienna Chamber of Commerce have been baffling financial experts of all descriptions with their formula to calculate the second phase of state support for small businesses and the self-employed. So much so that even Mrs Barratt, a graduate of the University of Economics in Vienna (where tax law was one of her courses) and someone who knows her way around convoluted financial gobbledygook, admitted defeat.

When it was first proposed a few weeks back, the figures knocking around were “80%” of income up to a maximum of 2000 Euros (for April, May and June). This didn’t sound too bad; not enough to retire to the Cayman Islands but a financial lifeline ready to be used to pay for all the sodding food we are currently buying. However, it now appears that the 80% will be based on the average monthly net income and this is problematic, in many sectors, for two reasons:

Problem 1: it takes no account for seasonal fluctuations in earning power. In my business, March, April, May and June are the times when I earn money, which is double or three times the yearly monthly average (the rest of the year I retire to my baroque Schloss on the Wörthersee and tend my plum plantation). To get 80% of a yearly monthly average, even with the dribble I have managed to earn via video calls, becomes about 40-50% of normal earnings at this time of year. So, time to cancel the weekly delivery of Sekt, cigars and Austrian caviar.

Problem 2: the calculation will be based on the net income, so after taxes and business expenses. But the curious way the deductions systems is structured in Austria means that social insurance payments are treated as an expense (and in fact is my single biggest outlay in any given year). So, this assumes I will get 80% of what I normally would receive after paying both of these things. Yet, and here is the tiny concern, I still have to pay cover these encumbrances. Admittedly, I can apply to have my current social insurance projection reduced or even suspended but there is a lower limit (Mindestbeitragsgrundlage or Geringfügigkeitsgrenze), irrespective of income, of around 400 Euro per month. And this will have to be paid at some point.

Still, every little helps, and if it means I have to take a hit for the team to protect the Austrian health system and stop the spread of Covid-19, then I am willing accomplice. Especially as it gives me more time to stay at home with the family, clean the toilet twice a day, and use the extra hours free from the shackles of labour to witness the vain affectations of my bulging neighbour. And if the financial situation doesn’t improve then I can always dispatch the kids off to harvest asparagus. Apparently, there is a shortage of pluckers.

Stay well, Leute, and look after your health (especially your mental health).