Shop of the Year

It might be a street lacking in the dynamism of Hipster Central. It might be situated amongst architecturally neutral buildings running from the backside (as the hilarious language false friend in German goes) of U6 underground station Philladelphiabrücke. And it might be opposite the Schnapps Museum. But Vienna now has a shining beacon to the craft beer scene with the aptly named Beer Store Vienna on the Wilhelmstrasse in the 12th district.

According to the online craft beer specialist mybier.at the average Austrian supermarket sells thirty beers from the ten biggest Austrian breweries. This excludes the more than one thousand other beers produced by the two hundred or so independent breweries, and means almost 97% of Austrian beer never makes it on to the shelves of the big retail players. At least until now. At the Beer Store you can get a fantastic trove of Austrian ale, stout, porter, wheat beers and lagers which would never feature in your sanitised version of a beer selection in Spar or Billa. Mind you it is not cheap. I paid €2.80 for a bottle (33cl) of Gablizter “Wiener Lager” (the discovery of the year). But you get world-class Austrian beer from some tiny breweries and you will be endowed with a sense of something exceptional (if your idea of exceptional involves hops, water and yeast).

*Editors note: A word of clarity (impossible after seasonal Bockbier). Although the Austrian beer scene is dominated by Brau AG, part of Heineken, there are also some sensational beers produced by middle sized players: Weitra, Schremser and Zwettler from the Waldviertel in Lower Austria, Murauer in Styria, Golser in Burgenland. Even semi-industrial Stiegl makes your average British or American lager seem like a work of Da Vinci. 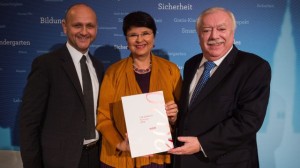 I will be addressing the issue of tourism in Vienna in the New Year, once the city has returned to normal after the incursion of buses for Advent and the one million plus invasion of the inner districts for New Year’s Eve. As such, I shall try and defer opinion until then and enjoy a turkey sandwich. But earlier this year, deputy mayor Renate Brauner, Vienna Tourist Board director Nobert Kettner and mayor Michael Häupl (see above) presented the new 2020 Vienna Tourism Strategy. In their hubristic words (directly copied from Stadt Wien so if you have any problems with the grammar hassle them with your pedantry) they declare that:

“The aims of the 2020 Vienna Tourism Strategy are to ensure that Vienna will continue flourishing and to further strengthen the role of tourism as an economic factor in Vienna. The tourism and leisure industry contributes a remarkable annual amount of 3.23 billion Euros to Vienna’s gross regional product. Each million euro spent by tourists creates eleven new full-time jobs.”

Part of this plan is to package Vienna as a “premium” destination, whatever that means, with lots more international flights, additional luxury hotels and continual leveraging of Vienna’s life quality, smart-city civic infrastructure and the potent dynamism of its brusque waiters. The scheme is also explicit in its target of raising “over-night” stays by 40% – in 2020 – to a whopping eighteen million. Currently, there are thirteen million (a rise of 60 % since 2003) which would explain the proliferation of tat tourist shops, crap mime artists outside Stephansdom and over-sized tourist hop-on, hop-off buses squeezing through the inner districts like cruise ships in Venice. But a 40% increase would boost hotel revenues to over a billion Euros although one would assume this very much contingent on the long-term viability of the rouble and the promise of Russian cash. Answer: probably niet.

But my point, a succinct one, despite reserving judgement of course, is that most modern tourist chiefs seem to miss the lesson about sustainable tourism at tourism school. Or if they didn’t, believe that when they come to office they will be the first to implement an expansion in tourism that will not impact on local populations and compromise the integrity of the indigenous cultural mix. In Europe, the evidence is everywhere: Venice, Prague or Barcelona, all stunning, unique cities suffocating under the extraction or more tourist dollars, relentless promotion and selfie sticks. Prematurely, I used to think that Vienna could escape such excess, but now I am not so sure. Anyway, I seem to be getting ahead of myself. Ooh, another sandwich.

Last year it was the Mariahilferstrasse, a road-reshaping mission so civically consuming that even most doleful of Vienna intellects were momentarily roused to express concern for the capital’s prime shopping street and the future of the retailing in the number one city. However, with a fanfare and a flourish, the paving stones were down just in time for the Christmas lights, unhurried mugs of scalding Glühwein and a splash of last minute consumerist desperation. And even through my well honed yet critical ocular consciousness – a sense sharpened over many years of sitting in public houses discussing the labours of man and universal truths – I think it looks splendid. More so if even one metre of the conversion irritates, even for one second, any car owner who still clings to the belief that a city is about driving (and, explicitly, their right to drive anywhere).

All the same, this year’s award goes to the on-going project in Vienna to renovate its entire school system (what they call a Sanierungspaket) in preparation for the expected increased demand for places by 2025 – an extra 25 thousand over-spoilt pupils.

The initiative is not new. It started in 2008 although I am not sure if this coincided with the global financial crash where, shortly afterwards, much of the panicked histrionics in the rooms of Vienna’s town hall education department consisted of variations on: “You promised how much, you Trottel!” But it will continue to 2017 with a budget of somewhere between 570 and 700 million (the equivalent in roubles will get you an iPhone 5) bringing with it new meaning to “facelift” and the renovation of every compulsory school in the capital – all 242 of them. Quite understandably some cruel and mocking commentators have argued that rather than real estate it is most of the teaching personnel who necessitate a makeover. But fashion advice aside we are not talking merely about a lick of paint, some disaffected teenagers on job-training and repeated talk of “Das wird kosten, Schatzi”.

On the contrary, it’s Keynesian in its vision – new roofs, facades, windows, heating and water systems, toilets, electrics, PE halls (Turnsälen), playgrounds, school kitchens, bike sheds and labs. Not to mention the new buildings. To quote one Austrian newspaper: “Kein Quadratmeter bleibt unberührt” – essentially, not one square inch (okay, metre, but it doesn’t sound so good in English) will remain untouched. And that on any day of the week is quite phenomenal. I just wonder where the money is coming from when you consider what is happening below.

(There is no photo accompaniment for this paragraph as hanging around schools taking snaps usually results in arrest or the lynch mob.) 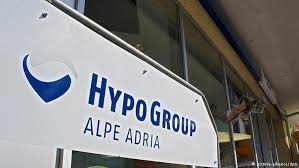 This month the Griss Commission was published which sought to explain which Dummkopf thought it would be a good idea for a regional bank in Austria to nearly bankrupt the alpine republic (current exposure to date about € 9 billion although the words “bottomless” and “pit” have been mentioned more than once since 2012). The bank in question is the infamous Hypo Alpe Adria from Carinthia, Austria’s most southerly province. Carinthia is famous for its beautiful lakes, the skin-crawling television presenter Armin Assinger and something called Villacher Fasching, a comedy night that manages to make even Germans appear hilarious. And it is also the reason now for much national soul-searching.

If you ever met a Carinthian they will tell you (assuming you can understand their incomprehensible dialect) that the local government dominated by our deceased friend Jörg Haider, former flamboyant millionaire head of the right wing FPÖ – it’s like UKIP in the UK but the members have much better tans – gave the “Hypo” certain financial “guarantees”. What they received in return is unclear. However, without getting into too much detail, the bestowment of these “assurances” and the reaction it engendered amongst the management was a bit like when my five year old is given control of the bank in Monopoly. And what followed was (and is) a text book case of the dangers an under-regulated market, free-wheeling financial speculation with perilous financial investments no one understands and not buying up Mayfair and Park Lane early in the game. More so because once it was clear that the bank and its owners had backed the kind of horses my father used to spend the housekeeping on, it had to go begging to the Austrian state (and its citizens) for a rather large cash injection.

Almost everyone of a certain age in Austria has heard of Hypo. It is one of few events of the last years that have shaped the psyche of the Austrian electorate towards its politicians and the future of all parties. In doing so it has unified both left and right in the conviction that there is something fatally skewed – almost immoral – with international banking and its snug ties to ruling political elites. In short, change is essential. But will it happen? I am not sure. Especially with ball season approaching.

The Griss Commission simply sought to establish what ensued and who was responsible. It did not attempt to answer questions about the future regulation of banks and how politics should intervene or act with more urgency to prevent such financial meltdowns again. Undoubtedly, this is a missed opportunity. I don’t need a panel of financial and legal experts (a toothless vanity project of the ex-vice chancellor of Austria to appease critics) to tell me that the regulators, the ministry of finance and the management of Hypo made a bit of a balls up and were equally culpable. I have seen the bill. Disappearing down a black hole bigger than the one created by the Klingons. Nevertheless, the blamestorm baton will be picked up by a parliamentary inquiry in the New Year when it will get really dirty and political. Which gives us hope. Or would do if anyone believed that such politically-loaded investigations had any kind of reputation for effectuality of outcome or financial prudence for the taxpayer.